Why Are Hawaiian Beach Sands Black, White, Red, and Sometimes Even Green?

If you’re dreaming of white sand beaches, swaying palms, and sweet ukulele music drifting on the warm breeze, then you just might have to adjust your expectations of Hawaii. While there are a fair share of white sand beaches on the islands, you’re also likely to run into black, red, orange, and even green sand on your next beach excursion.

This rainbow hue of sandy colors make the islands even more magical. It also makes the islands incredibly interesting to geologists. But you better get here fast -- at least in slow-moving geological terms -- because these rainbow hued beaches won’t last forever.

The Rare Green Sand Beach on The Big Island 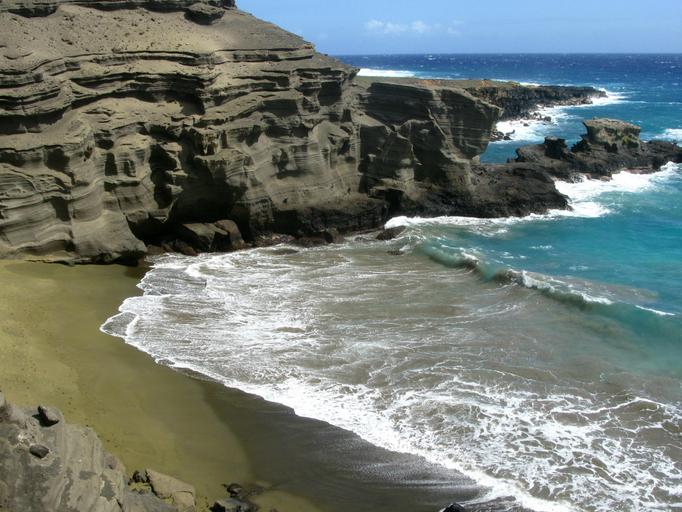 There are only two green sand beaches in the United States, and you’ll find one of them hidden in a cinder cone on The Big Island. Though, it’s a bit tricky to get there.

You’ll have to drive towards the southernmost point in the United States on Highway 11. You’ll find a dirt parking lot between mile markers 69 and 70. Make sure to pack plenty of water and sunscreen because you’re about to trek through open fields for 2.5 miles.

You can usually find locals with pick-up trucks at the trailhead who are willing to drive you out to Green Sand Beach for a cash donation. The price is negotiable, but you can count on paying anywhere between $5 and $10 each way. You’ll pile into the back of the pick-up with a bunch of other tourists, and you’d better get a good spot and hold on. It’s a bumpy ride.

If you’re walking, you’ll want to hug the coast while staying off the 4x4 tracks. You don’t want to be another obstacle for the tourist-toting trucks. You’ll eventually get to a hill, and, just over the hill, you’ll be treated to one of the rarest sights in the world -- a green sand beach.

The beach sits inside of a cove which is a partially collapsed cinder cone. It’s this cinder cone that makes for all the magic. The waves have been crashing up against the volcanic cone for thousands of years to pound olivine crystals out of the rock. It’s these crystals that give the beach its pale green hue.

You can find a trailhead down into the collapsed cinder cone near the tourist-toting truck drop-off point. If there are no trucks, just look for the ladder down into the cone near a picnic table. The hike down is rather steep, so only head down if you’re confident in your dexterity and fitness.

Once down on the beach, scoop a handful of sand. Look at it closely. You’ll see pale emeralds mixed in with regular beige sand. The surf kicks these green particles around, so take a little walk to find the greenest patch.

You can swim at this popular beach, but there are no lifeguards and the surf is occasionally dangerous. Make sure to check the surf report before venturing off to Green Sand Beach to make sure the swimming is safe. The short break of the beach makes for great body surfing, and you just might be body surfing next to sea turtles that like to eat in the protected cove. 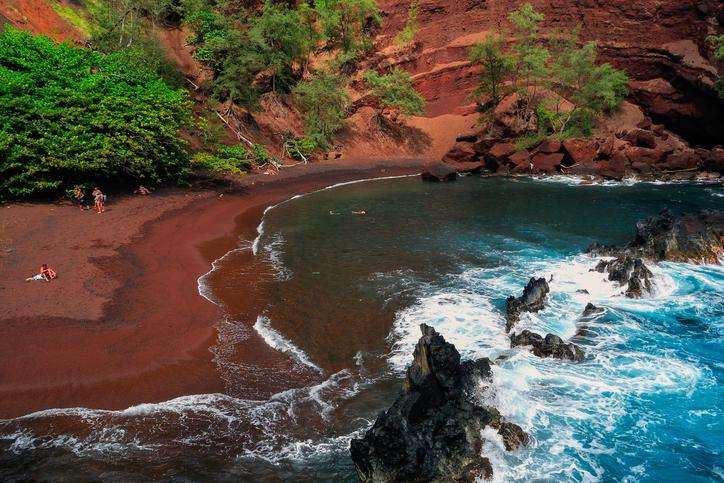 The Road to Hana is an experience unto itself, but there’s a rare treasure that awaits you at the end of the road. The road, of course, ends in the town of Hana where you’ll find a sparkling red sand beach inside of Kaihalulu Bay.

This beach is a bit difficult to find and the hike down to the red sand can be quite dangerous. That’s why Red Sand Beach is considered a hidden gem despite the fact that it sits right in the middle of this popular Maui town.

The track down to the beach is slippery, narrow, and steep. Tourists take tumbles down the track every year, so only make the descent if you are confident in your dexterity and fitness. The track is made of Hawaii’s famous red dirt that can get very slippery when compacted and wet. And don’t take this warning lightly. Slick Hawaiian dirt can be as slippery as lake ice.

Make sure to pack water, sunscreen, a snorkel, and a towel down to Red Sand Beach. The rocky shore features plenty of protection from the open ocean which creates a beautiful little lagoon perfect for snorkeling and wading. Just be careful not to venture beyond the protective rocks..

And make sure to bring your camera as Red Sand Beach is a study in color contrast. The brilliant red of the sand shines against the electric blue of the water which is all crowned by the deep green of a fringe forest. 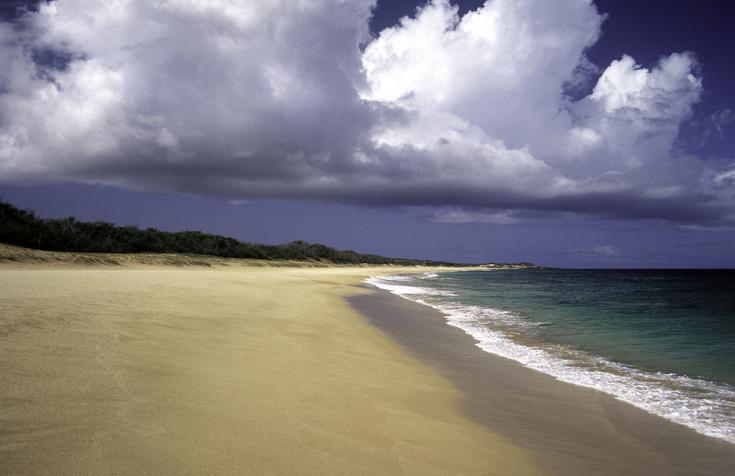 Molokai is an island usually reserved for the veteran Hawaii vacationer. It is an isolated island with no tourist infrastructure and no stoplights. You’ll have to use your travel-savvy to truly enjoy the fruits of this Hawaiian gem.

If you make it to Molokai, which few can say they have, you’ll be treated to a rare wonder -- an orange sand beach. You can find the beach on the island’s mostly deserted west side.

The beach’s Hawaiian name is Papohaku Beach which is not to be confused with the Maui beach of the same name. It sits inside of a 10.5-acre park that is well signposted. You’ll also find showers, bathrooms, and picnic tables inside the park.

What you won’t find are people. This three-mile-long, 100-yard wide beach is one of the largest in all of Hawaii, and it is almost entirely devoid of tourists. Make sure to plan an entire day down at the isolated beach because the sand doesn’t always look orange.

You’ll have to wait for certain times of the day, when the sunlight hits the sand just right, to see the orange hues shine through. It makes for a great picture and the orange color can aid the appearance of your Hawaiian tan for a jaw-dropping selfie.

Otherwise, enjoy the isolation and the views of Oahu off in the distance. The swimming here is perfect but seasonal. The waters can be dangerous between the months of October and March. 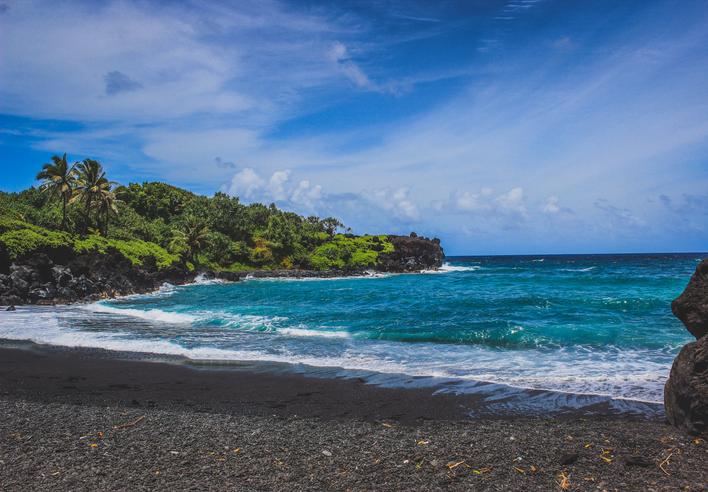 Go to The Big Island to see the birth of a Hawaiian isle. The active volcano in Hawaii is growing the island by 40 acres per year. And you can see fields of black volcanic rock in nearly every direction.

That black rock is created when hot magma pours into the cool waters of the Pacific. You can even hike up to the pour-point to see the lava shooting a towering cloud of steam and glass as it crashes into the ocean. Just keep your distance because the fumes are toxic.

Tiny particles of volcanic rock cool instantly when the lava pours into the ocean. Waves also crash against the black rocks for hundreds of years to crack off small pieces. And its this erosion that creates the stunning black sand beaches that you’ll find on the younger islands.

Black sand might be nice to look at, but it is grainy and painful underfoot. It’s not the best place to lay out on the beach on a sunny day. But black sand beaches, found mostly on The Big Island and Maui, are great for a picture with the stark contrast between the night-black sand and the azure blue waters of the Pacific.

Black sand beaches are young. They haven’t endured hundreds or even thousands of years of erosion where the waves mix the volcanic rock particles with coral and quartz to create white sand. 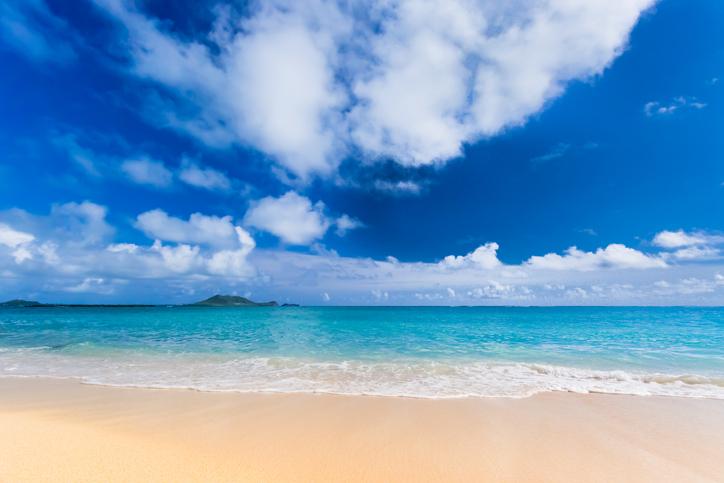 White sand beaches are wise because they are old. They’ve been around long enough for the ocean to pound the black volcanic rock of the island into small bits. Those black bits then mix with calcium from coral and shells as well as quartz to create white sand. Pick up a handful of the white stuff and you’re likely to see little black flecks mixed in.

You'll be treated to a beautiful view of Hanalei Bay on the Kuhio Highway as you descend a cliffside to Hanalei town.

The Big Island has 10 of the world's 14 different climate zones, and Hapuna Beach sits right in the middle of a dry zone. This beach only ...