Kauai is Hawaii at its most lush. Nicknamed “The Garden Isle,” it’s where exotic fruits grow wild in verdant valleys against the backdrop of towering, waterfall-covered mountains. It’s the kind of place that people envision Hawaii to be before ever stepping foot on the soft sand of the 50th state.

The dormant volcano in the middle of the island, Mount Waialeale, is the rainiest place on earth. The interior of its crater is covered with hundreds of waterfalls. Locals call it The Blue Hole and it features a falls-swept cliff dubbed The Weeping Wall.

All of that rain carves its way to the ocean to create the only navigable rivers in the state. It’s absolutely stunning, but it’s also a reminder that Kauai is washing away. It’s the oldest of Hawaii’s main islands, and all that water is carrying its famous red dirt out to sea. One day, in the far off future, Kauai will sink into the Pacific.

But the old age of the island is to your benefit. Time has ground the volcanic rock of the island down to create welcoming white sand beaches all around. In fact, the diminutive island features the most beaches of any island in Hawaii. So, you have a lot of options.

These beaches were chosen with safety in mind. They were chosen because the waters are protected from the notoriously harsh Pacific surf to make for a reliably safe swim despite the fact that you may find more beautiful beaches on The Garden Isle. But, as always, check ocean conditions, consult an on-duty lifeguard and never turn your back to the ocean. 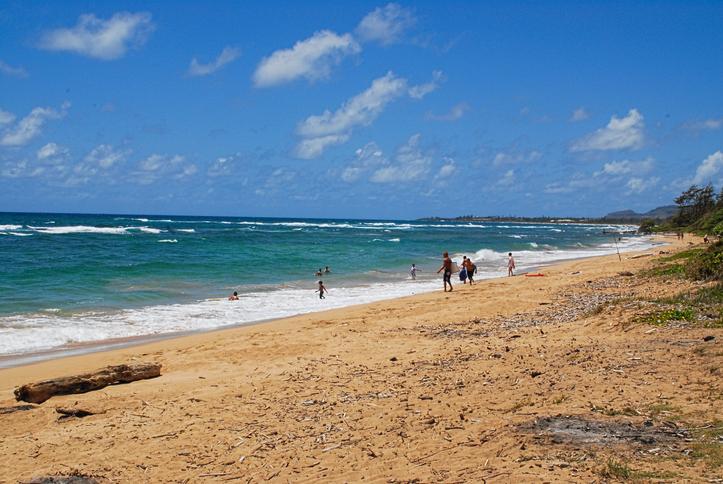 Lydgate Beach Park is the safest swim in all of Kauai. Massive rocks were craned into the ocean to make reliably safe swimming “pools.” The first one you’ll notice is for the kids. Locals call it the “Keiki Pool” because it’s extremely shallow which makes Lydgate Beach Park perfect for families with young children.

The larger pool gets about six to eight feet deep up against the far wall. You might notice the surf crashing high on the rocks, but it won’t reach over to get you. This pool is a great place to learn how to snorkel and swim if it’s your first time. And you’ll find plenty of tropical fish in the larger pool without the risk of the Man-o-war.

This is a popular beach with tourists as they are drawn to the turtles and seals that sleep out on the sand. Remember that Kauai protects its wildlife fiercely and that turtles are protected by law. The oils in your skin will degrade a turtle’s shell, and, if caught, a police officer will cite or even arrest you for disturbing the wildlife. You might even notice a police tape barrier set up around the slumbering seals and turtles. Enjoy the critters from a distance.

There’s a shallow sand bar that cuts Poipu Beach into two distinct swimming sections. The eastern side is shallow, but you can still swim into a turtle as they like to munch on the mossy rocks. The surf here is calm and good for children, but you might run into some sharp volcanic rocks on the bottom. It’s always good to pack a pair of water shoes to protect your feet.

The western side of the sand bar is much deeper. In fact, it gets to about five feet deep just a few steps into the water. You won’t find any volcanic rock over here as the ocean features a soft sandy bottom. When there’s no swell, the water here is glass calm and perfect for a vigorous swim. Then, when the sun begins to set, you can look west to see surfer silhouettes against a soft orange and red sky. 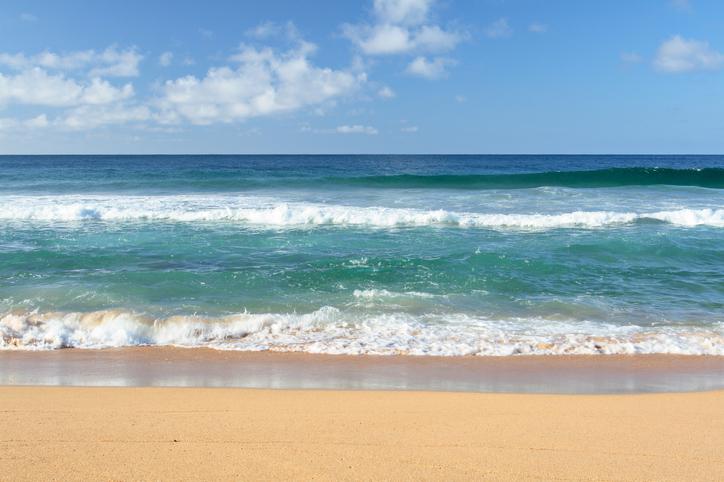 The north side of Kauai is wet, humid and tropical. It’s also where you’ll find Anini Beach Park. There’s a long windy road that takes you down to a reliably calm beach as the entire length of Anini is protected from the strong north coast surf by a coral reef.

This is a long beach, and you’ll find many families down here seeking out the calm waters. You can keep driving on to find your own little spot. It’s the perfect place to snorkel and you don’t have to worry too much about the surf.

The shallow waters make Anini perfect for the entire family. You’ll also find plenty of trees on the backside of the beach for shade. And it’s not hard to find a deep enough lane against the reef for a good swim. But, as always on Kauai, keep an eye out for waves that can get up and over the protective reef. 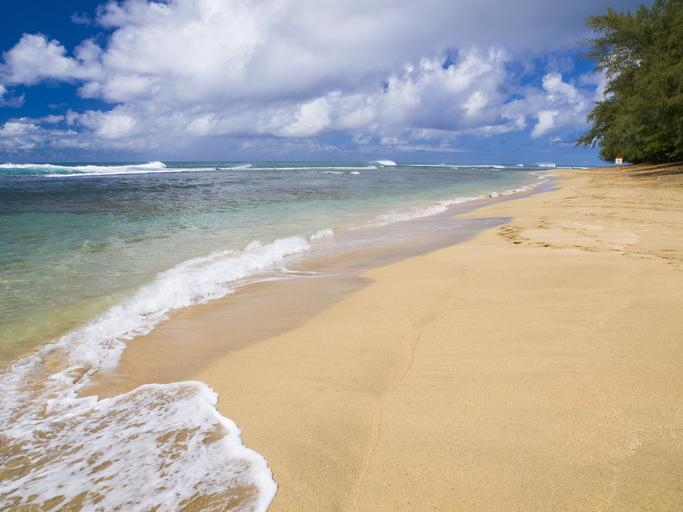 The end of the Kuhio Highway north is where you’ll find Ke’e Beach. It’s a bit of a trek. You’ll have to descend into the Hanalei Valley, traverse several one-lane bridges and brave the road as it clings to cliffsides, but you’ll be rewarded with one of Kauai’s most beautiful beaches.

Ke’e is the trailhead for the popular Hanakapei Falls and Kalalau Valley trails, and the beach features a small parking lot. You’ll have to get to this beach early in the morning to get a spot, or you could just get lucky. There’s an overflow parking lot down the road, but it’s made of dirt, washed away and has deep potholes. Do not park on the road between the parking lot and the overflow parking area as you’ll certainly get an expensive ticket.

The luscious jungle-like forest of the north shore extends all the way into the water at Ke’e. That means you’ll be setting up your blanket under the shade of trees. There are plenty of feral chickens with chicks roaming the beach, and the first cathedral cliff of the Na Pali Coast towers over the south end of the sand. It makes for a dramatic picture at sunset.

You’ll find a protective reef about 75 yards out into the water, but it doesn’t always protect the beach’s swimming pool. You’ll have to check the swells and surf before heading out to Ke’e for a swim. There’s one lifeguard stand on Ke’e, and you can’t miss it. Always ask the lifeguard if the water is safe as the waves have been known to sweep people out to sea over the reef. But, if it’s calm, Ke’e features one of the most beautiful swims on the island.

Strap on some goggles and you’ll be treated to five-star tropical fish watching out in the deeper water near the reef. After your swim, you can hike the first mile, or so, up the Kalalau Valley Trail to a viewpoint over Ke’e where you can see down the length of the Na Pali Coast. It’s unforgettable. The hike is dry and hot, but there’s usually a local selling whole green coconuts with ice-cold coconut water inside them out of a truck in the trailhead’s parking lot. 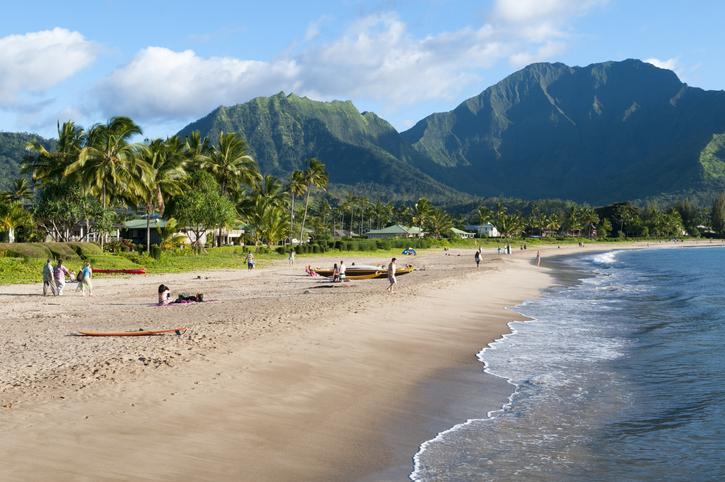 You’ll be treated to a beautiful view of Hanalei Bay on the Kuhio Highway as you descend a cliffside to Hanalei town. Its a half-moon bay with stunningly blue water crowned by waterfall covered mountains. Once down on the beach, look at the length of the mountains running east to west and you might be able to make out the silhouette of a giant, slumbering dragon. That’s Puff the Magic Dragon who lives by the sea.

An iconic pier cuts the beach in half down at Hanalei Bay. On the edges of the bay, you’ll see surfers taking advantage of the north shore’s waves, but those waves rarely ever make it into the bay to disrupt a swim. If they do, they are usually perfect for a bodysurfing session.

The sandy beach rarely has any debris to worry about, so you don’t need any water shoes for a swim at Hanalei Bay. Just make sure to stay in the center of the long beach as the edges can get a bit rough, especially during the winter months.

Parking at this iconic beach can be difficult. There is a rough dirt parking lot near the bathrooms, barbecues and picnic tables. You’ll find this area in the middle of a residential area. You’re not supposed to park along the residential street, but you also might find it difficult to find space among the local’s trucks in the dirt lot.

And many enjoy this beach for its proximity to town. You can enjoy a swim and then stroll into a Hanalei town for a bite to eat, a drink or for a bit of shopping before returning to the soft sand and welcoming waters.

While there are many activities to choose from on Kauai, these activities are some best things to do during a vacation to Kauai

The Big Island has 10 of the world's 14 different climate zones, and Hapuna Beach sits right in the middle of a dry zone. This beach only ...

Kauai's south side is the perfect setting for this beautiful restaurant. The weather is reliably beautiful which makes the near-nightly ...

Kauai is The Garden Isle, and it's a fitting nickname. You'll be able to pick wild avocado, mango, star fruit, strawberry guava, longan, ...