It is said that Maui threw his magical fish hook to the bottom of the sea, and with all his might, he pulled up the island. The ancient Hawaiian god had a lot of strength because he pulled Maui up to the sky. The island’s towering Haleakala Volcano stands 10,023 feet above sea level.

Haleakala is one of six still-active volcanoes in Hawaii, but don’t worry. The last time the mountain erupted was between 1480 and 1600. The near-dormant crater at the top of the volcano is preserved as a national park where tourists flock for the otherworldly moonscape. The reds, blacks, oranges, and purples of the volcanic dirt shimmer during a sunrise or sunset.

Encircling this massive volcano is the Road to Hana. This world-famous attraction takes you along the east coast of the island to a myriad of viewpoints, hidden beaches, stunning waterfalls, and misty rainforests. While the road may be crowded with tourists, you can still find hidden gems along the way that will allow you to escape the crowds.

Zoom out on a map of Maui, and you’ll notice something peculiar. The island is actually two islands fused in the middle. The larger eastern island is where you’ll find Haleakala and The Road to Hana. The smaller western island is the home of former whaling stations.

These whaling stations have now been converted into resort towns, and Maui has some of the nicest resorts in Hawaii. These resort towns are now a great place to enjoy the humpback whales when they migrate to the islands from January to March. These majestic beasts swim more than 6,000 miles over the course of eight weeks from the colder waters of the world to breed, birth and rear their young. And they seem to celebrate by breaching just off the coast for your delight.

Maui has some of the best beaches in all of Hawaii. Couple that with world-class resorts and you have the recipe for romance. That’s why you’ll likely see a handful of weddings during your visit to this popular island. 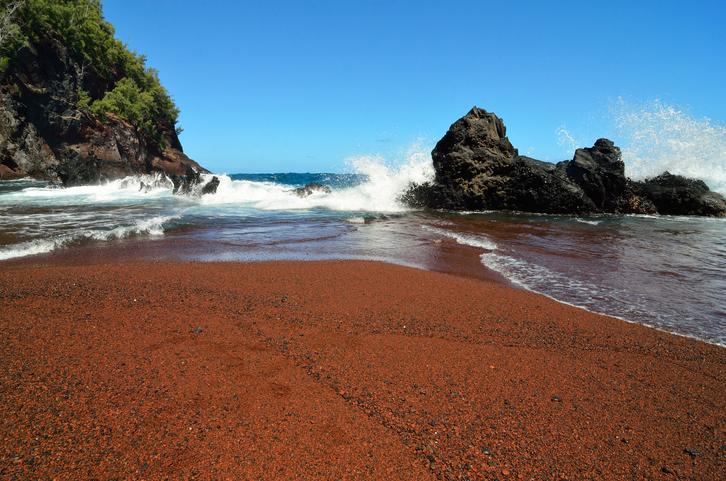 You’ll have to ride the road all the way to Hana to experience one of the strangest beaches in the world. You’ll find the short trail down to the beach at the end of Uakea Road. Be prepared for a steep and slippery trek through a forest that takes you down to the coast. The red dirt along the path can get extremely slippery when wet and compacted, and you can bet on the dirt is wet and compacted with swimmers traversing the path all day long. Make sure to wear sturdy shoes, take your time and use exposed tree roots for a good foothold.

Once you’re safely down on the coast, it’s time to trek east to the Red Sand Beach. The entire beach has been carved out of a cinder cone that is rich in iron ore. That iron has oxidized to give the sand its brilliant red color. And that red color makes the beach perfect for an artsy picture because of its contrast with the deep blue water of the Pacific and the brilliant green of the trees above the beach. Its a study in contrast.

The water here is protected by a reef and an outcropping of red rocks. It’s perfect for wading and snorkeling. Just don’t go out beyond the protective rocks or you’ll be at the mercy of the Pacific Ocean and its powerful currents.

As a warning, many people have fallen on the trail to this beach, so don’t say you weren’t warned. If you go, go safely and take extra care and NEVER go when it has rained recently. Also, this beach is viewed by some as an unofficial nude beach, so don’t be surprised if you see some bare bottoms while you are there. 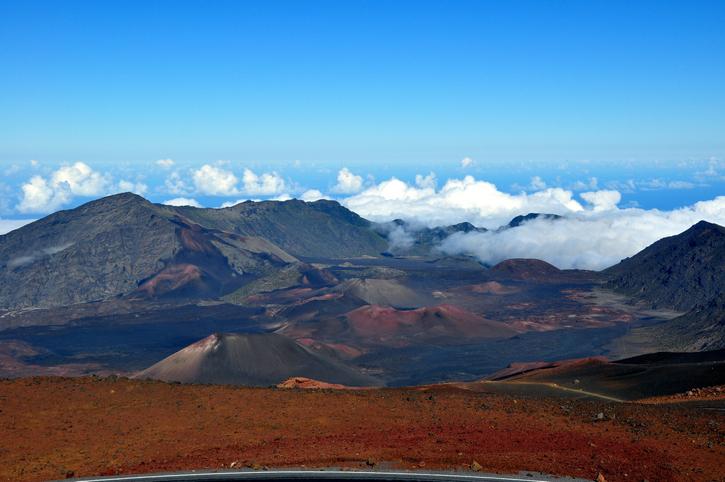 Technically, the tip-top of Maui’s massive mountain is a still-active volcano, but you shouldn’t worry because the last time to the mountain erupted was sometime in the 1600s. But the fact that the crater is still active makes a visit to the National Parkway cooler. After all, when’s the last time your friends hiked around inside an active volcano?

And that’s exactly what you get to do in this moonscape. You can gear up, hike past silverswords and cinder cones to camp at 10,023 feet. And the colors inside the cone are otherworldy. The volcanic ash has mixed with iron and other minerals to bleed oranges, reds, purples, blacks and even greens through the barren soil. And these colors tend to change and even shimmer at sunset or during sunrise. It’s a hauntingly beautiful place.

You can even join a tour to the top of the mountain where you can enjoy the sunrise and a hike before getting on a bike to ride the long, slow slopes of the volcano back to town. It’s a great way to be outdoors without exerting too much energy.

This crater is a once-in-a-lifetime natural wonder. It’s great for the whole family and a trip up the mountain consumes an entire day’s worth of activities. Just make sure your camera skills are sharp. It’s very difficult to capture the incredible color as well as the sheer size of the moonscape that you’ll find atop Haleakala. 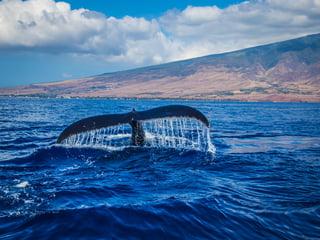 Hawaii is made up of eight islands. Two of them -- Niihau and Kaho’olawe -- are off-limits to tourists. Two others -- Molokai and Lanai -- are rarely visited “locals” islands. That leaves four islands -- Hawaii, Maui, Oahu, and Kauai -- as the Big Four, and Maui is the best of the Big Four for whale watching.

Pull up a map of Maui and zoom out. Zoom all the way out. You’ll see that Maui is essentially two islands that have been fused together at the waist. The smaller western island is where you’ll find a handful of old whaling stations that have turned into resort towns, and those whaling stations were there for a reason -- an abundance of whales.

Maui has the highest concentration of humpback whales during mating season. The whales begin to arrive in the warm, friendly waters of Hawaii in January to breed, birth and rear their young. These 40-ton creatures swim up to 6,000 miles over the course of two months to reach Maui, and they can often be seen celebrating the mating season by breaching off of Maui’s beaches.

It’s nearly impossible to not see a whale between January and March on the western side of Maui. Just pull up a beach chair and watch the water for jumping whales. You can also join a whale watching tour to get up close to the animals. And it’s easy to get up close to the creatures because they are the most buoyant whales on earth. That’s why they are called humpback whales. They have to rise up and then hunch over to gain the momentum necessary to dive deep into the water. 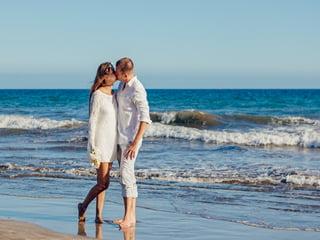 The western “island” of Maui is perfect for romance. The former whaling stations that dot the coast have been gutted and repurposed. They are now a series of luxurious resort towns.

That means you get all the amenities of a big city without all the people, hustle or bustle. Some of the world’s best chefs have opened up restaurants here, and each resort is vying for your business with pampered offerings.

And Maui has the most miles of swimmable beaches in Hawaii. You could lay your beach towel down on a daily basis for three months and still not experience every seaside swimming spot the island has to offer. This means that you and a loved one could disappear on Maui to find a beach spot of your own before returning to the luxury and romance of your resort.

But the cat is out of the bag on this one. You’re likely to run into a wedding during your stay in Maui, and you’re just as likely to meet honeymooners. But this shouldn’t dissuade you from an unforgettable couple’s getaway on Hawaii’s most romantic island. 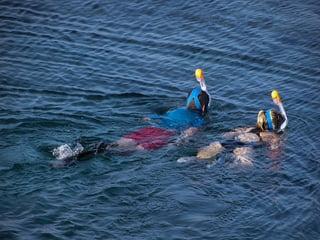 Maui has more than 30 miles of beautiful beaches to explore, and the island is home to the only red sand beach in Hawaii. You’ll also be able to find white and black sand beaches along Maui’s coasts.

This can make Maui feel like a true tropical paradise. You can explore new beaches every day to find your own secluded spot, and you can tote your gear for an equally secluded snorkel.

Narrowing your itinerary down to 10 things to do and see while on the island of Maui, Hawaii, may seem impossible; however, here are a few ...

Top 10 things to do on Maui

Maui plantation that just so happens to have a restaurant. You can choose to eat indoors, but why would you when you have the option to eat ...

We recommend that you pickup a rental car during your Hawaiian vacation. When renting a car in Hawaii it is easy to do so at the airport. ...

Hawaii Car Rental Tips You Should Know For Your Hawaiian Visit