Measured from the ocean’s floor, Mauna Kea stands more than 33,000 feet with 13,796 of those feet protruding from the water. Mount Everest stands a paltry 29,029 feet in comparison. And Mauna Kea, which is one of Hawaii’s six still-active volcanoes, becomes snow-capped in the months of January and February. Yes, The Big Island is so big that there’s skiing in the winter in Hawaii.

The Big Island has an actual name. It shares the name of the state -- Hawaii -- which causes a bit of confusion for some tourists. But you can always refer to the island by its size. Nobody will be confused about that. And Hawaii is so big that it can be a bit intimidating picking a good sunset spot. After all, there are more sunset-watching spots in Hawaii than any other island in, well, Hawaii.

It’s that massive mountain Mauna Kea that does some of the deciding for you. It cuts the island in half. On the west, you’ll find the city of Kona sitting in a hot, dry, sparkling black desert of fresh volcanic rock. To the east, you’ll find the small city of Hilo nestled in a rainforest surrounded by waterfalls and rivers. It’s pretty obvious that you’ll get better views of the sunset on the west side where no rain clouds, trees or massive mountains will be in your way.

But where on the west side of this massive island do you catch the perfect tropical sunset? Here’s our guide. 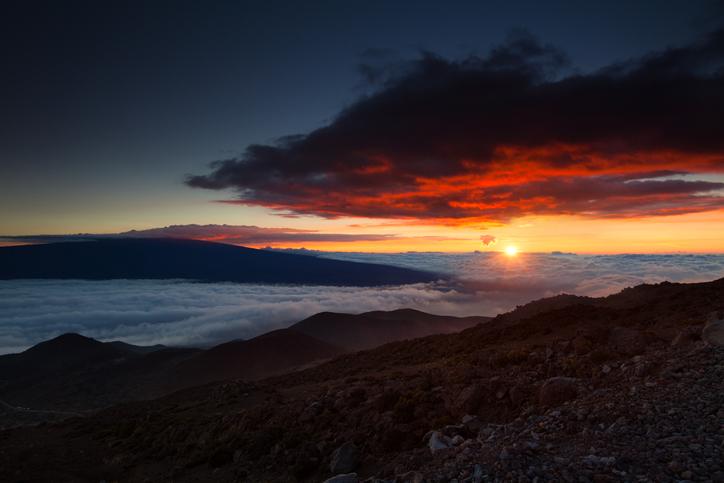 The Big Island’s defining feature is the best place to watch the sunset, but you need to be prepared. Standing more than 13,000 feet above the Pacific Ocean, the top of Mauna Kea stays cool or cold all year long. So, if you’re thinking about buying that Hawaii sweatshirt as a souvenir, it’s best to make the purchase before you head up the long, slow slopes of the volcano.

You’ll find a series of barracks-like buildings near the top of the mountain. These are research buildings that are funded by governments from all around the world. Mauna Kea gives scientists some of the planet’s best view of the cosmos, so there’s a lot of money invested in research atop the mountain. Now it’s your turn to research the sunset alongside these world-class scientists.

There’s plenty of room at the top of the mountain. Feel free to roam around in order to pick your favorite spot. The silhouette of the observatory itself makes for a great photo, so you might want to sit a bit east of the building.

If you’re lucky, it’ll be a cloudy day in Hawaii. You’ll bust through the clouds, and the sunset will make the top of the mountain look like a floating island. Unfortunately, the western side of the island, the exact side where the sun sinks into the ocean, is one of the driest areas in the whole state. So, the chances of an above-the-clouds sunset are slim.

Also, if you’re lucky enough to be on The Big Island during the months of January and February, then you may just be greeted by snow at the top of the mountain. It’s a festive time of year when locals load up pickup trucks for the kids waiting below. A hot weather snowball fight is quite refreshing. 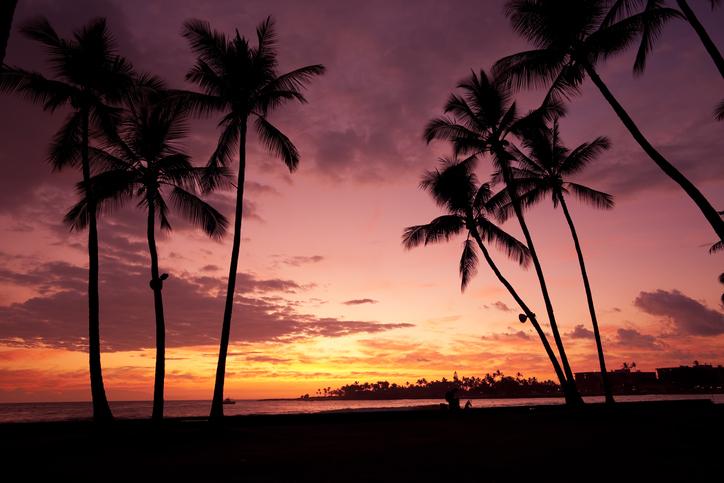 Kona is the Big Island’s “big city.” It’s not a very large metropolis, but it is the capital of the dry west side. And it’s a central beach in Kailua-Kona Bay is perfect for catching a sunset.

Kona is a Hawaiian word that roughly translates to the sailing term of leeward, and leeward means the side of an island less likely to see a storm. It’s the safest place to harbor a ship. It’s also the safest bet for a dry, hot and clear day. That’s why sunset gazing from Kailua-Kona Bay is reliably awesome. The weather will almost certainly be spectacular.

If you’ve been lucky enough to see an Arizona sunset, then you’ll know that dry air makes for jaw-dropping colors. You’ll be gobsmacked by the depths of the oranges and reds. You’ll just want to grab the soft sky down to blanket yourself in its calm, reassuring palate. Then, as the sun dips below the water, the sky will be drenched in a deep purple; deep enough to put you into a dream. 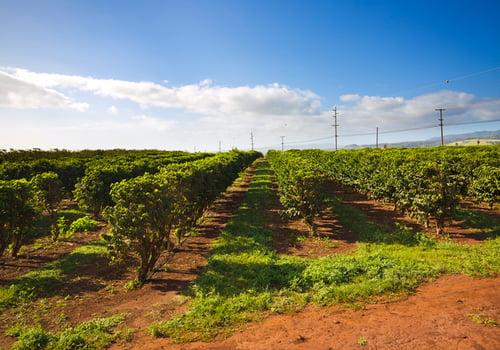 The Big Island has 10 of the world’s 14 different climate zones. And on the slopes of the island’s two massive mountains -- Mauna Kea and Mauna Loa -- you’ll find every climate in between. At a certain elevation, it’s perhaps the world’s best climate to grow coffee.

You’ll find some of these coffee farms on the western sides of the mountains. Elevated above Kona and its dry lava fields stand the Heavenly Hawaiian Coffee Farm. The farm grows the world-famous Kona coffee and is open daily for tours, but the grounds also have a patio with a pool, and you can also stay there like a hotel.

The patio overlooks the entire west coast of the Big Island. The sun will set into the ocean while creating a sea of sparkles on the water and on the fields of shiny lava rock below. This viewpoint gives you much more detail on the west coast as compared to the views atop Mauna Kea. 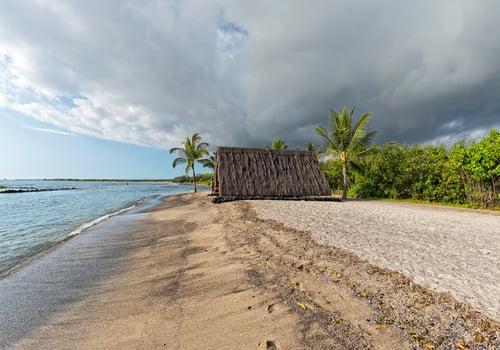 You’ll find this lesser-known park in between Kona City and the Kona Airport on the western side of the Big Island. It’s just across the street from the Costco and Home Depot. The park has a variety of walking trails that are perfect for a little pre-sunset stroll, and they allow you to scout the park for the most enviable sunset pics angles.

What’s great about the sunset at Kaloko Honokohau National Historic Park is the perspective. You’ll be able to watch the sun as it dips into the ocean beyond rocky outcroppings, peninsula dwelling trees, and slumbering green sea turtles. Your sunset picture form this historic park will have context, depth, and perspective. It will give the viewer a real sense of the Hawaiian islands even if they are looking at the picture on a small smartphone screen.

The park itself is a destination. Arrive a bit early to discover four different land and sea divisions, sacred temples and ancient petroglyphs. You’ll also be able to see ancient Hawaiian fish ponds where native people learned to harvest local fish. And it’s a popular napping spot for friendly monk seals and sea turtles. So, you might want to head down to the park in the late afternoon to explore and then wait for the sunset. 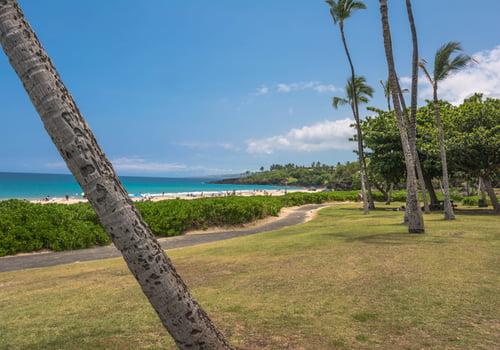 Hapuna is the best sunset scoping spot if you want to be in the water. This pristine little strip of white sand is an oasis on the volcanic rocks of the northwest Hawaii coast. There’s a small $5 fee for parking, but a day spent at Hapuna is not a day wasted.

In fact, Hapuna is often voted to be one of the best beaches in all of Hawaii, and it’s even made a few lists for being one of the best beaches in the world. You’ll find plenty of comforts. There are shade-giving trees that line the back of the beach, and the water is protected by reefs and coves, so its safe for swimming. Plus, the waves are just good enough for a good body surfing session, and you’ll find great snorkeling spots near the edges of the beach. There’s something for everyone at Hapuna.

The beach park affords you the opportunity to watch the sunset as you enjoy its calm waters. You can be splashing around with your family, swimming with your friends or holding your loved one. There’s no wrong way to watch the sun dip into the ocean, with all of its tropical colors, as your unforgettable day on Hawaii draws to a close.

Hawaii is one of the hottest destinations for vacations, honeymoons, and business trips, but what is there to do, once you get there?

Top 10 things to do on The Big Island

The Big Island has five active volcanoes. The two most noticeable are Mauna Kea and Mauna Loa simply due to their size.

Visiting the Big Island: Why?