If you're planning a Hawaiian vacation on Oahu, Diamond Head Crater is a sight you won't want to miss. This is one of the most recognizable and well-known landmarks in Oʻahu. It's an easy trip from the many resort hotels in Honolulu and nearby areas, which is part of why it is such a popular destination for tourists. Originally built as part of the island's coastal defense system, Diamond Head's trail is hiked by approximately 800,000 people per year, and offers a breathtaking view of the area that will make for an unforgettable trip. 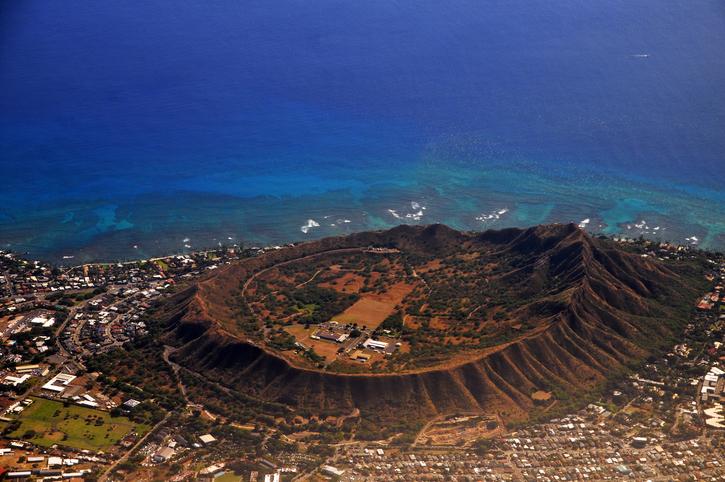 The story of the Diamond Head Crater begins somewhere between ‪100,000 and 500,000 years ago. It was formed as part of what geologists refer to collectively as the Honolulu Volcanic Series, which shaped many of the island's landmarks into what we know now. Volcanic activity on the island caused ash and other particles to be shot into the air for an extended period of time. Once this ash solidified around the volcano, it created what's known as a volcanic tuff cone, resulting in the crater that we know today. Visitors will be pleased to know that this is a dead volcano with no lava, meaning there is no danger of any future eruptions.

Diamond Head was originally called "Leahi" by the ancient native Hawaiians. This translates to "brow of the ahi," because it resembled a tuna's dorsal fin when seen from a distance. This area was significant to the Hawaiians as part of their mythology, featuring in the story of Hi`iakaikapoliopele and Pelehonuamea (or as they're commonly called in modern times, Hi'iaka and Pele). While this meant that going inside the crater itself was forbidden, native Hawaiians did construct several temples at the base and summit. The summit actually offered such a perfect view that it was used as a lookout for spotting incoming war canoes. At the rim of the crater, Hawaiians were also known to burn fires as offerings to Laamaomao, their wind god. 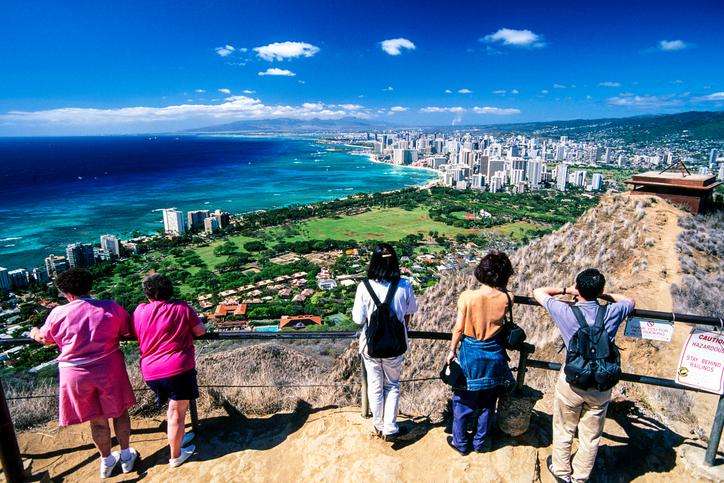 The name "Diamond Head" came from the British sailors that came to the area in late 1825. When they saw the crater's volcanic calcite crystals shimmering in the distance, they mistakenly believed them to be diamonds. Claimed by the Hawaiian government in 1884, the U.S. military bought 729 acres of land in and around the crater and constructed Fort Ruger. Now, Diamond Head is both a national and state monument and a highly popular tourist destination.

The Visitor Center is open from 7:00 am to 3:30 pm daily, and here you can check-in for one of the various tours that are offered or purchase logo merchandise. While this is one of the few trails on Oahu that charges {$5 per car or $1 per pedestrian}, it is well worth it as the view is absolutely stunning. It should take about 45 minutes to reach the top but can be reached more quickly if you're an avid hiker. Keep in mind, it can get a bit crowded with tourists as the day progresses. Once you reach the 760-foot summit, you'll be treated to a view of Waikiki Beach, which is the perfect place to stop and take a picture. You might even catch glimpse of a plane landing in the airport. 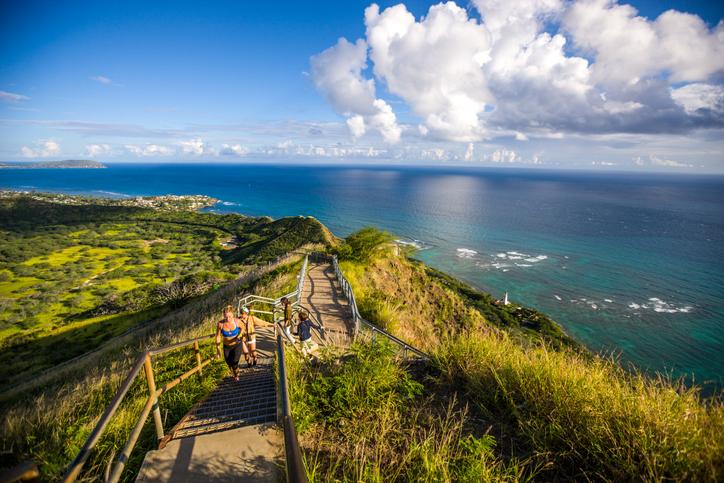 Hikers looking for a serious challenge may find themselves disappointed, but the fact that this trail is short and not too difficult is why it is so popular among tourists. In fact, it's perfect for the entire family and you don't need to be in great shape to take in the amazing views you'll find along the trail. You should be aware that a significant amount of steps are involved, however. There are three lookout points along the trail, with 74 steps that need to be climbed to reach the first, 99 steps to reach the second, and 54 steps for the third. Visitors who are concerned about safety will be pleased to know that there are safety railings along the trails. While hiking along the path, don't forget to look out for the Diamond Head Lighthouse, which is listed in the National Register of Historic Places and has been featured on a US postage stamp.

Something that visitors should be extremely mindful of is the lack of trees to block the sun's rays from beating down on you. This means if you want to enjoy a comfortable hike, it's important to bring sunscreen, as well as sunglasses, hats, and other forms of protection. Another fact to keep in mind is that the park opens at 6 am, making this a great place to see a sunrise, and means that you will beat the rush of tourists later in the day.

Diamond Head is also notable for holding the record for the longest recorded land views in the world. Between the rich native history and the amazing sights to take in, there's no reason to miss Diamond Head while you're on your next Hawaiian adventure!

That means you may be left unaware of some of Hawaii's cultural customs despite living in the same country. Don't be caught off guard but ...