Kalalau Beach is more about the journey than the destination, and it's not easy to get to this secluded, beautiful and verdant beach. The beach sits at the foot of Kalalau Valley which is the jewel of the Na Pali Coast. The rugged, inaccessible coast is made up of a series of green cathedral cliffs that reach out into the ocean like the talons of an island-sized dragon. In between each of the talons lies a valley, and none of them are more beautiful or abundant than Kalalau. 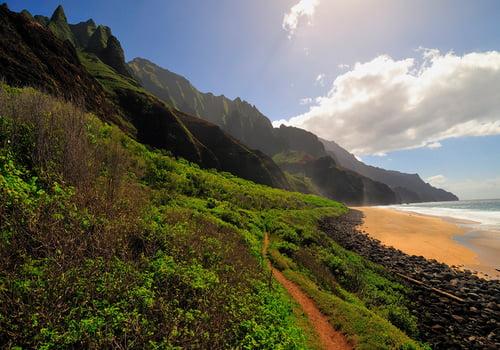 There are no roads that take you to the valley. You must either boat, helicopter or hike to this secluded destination, but that doesn't mean you can't catch a sneak peak without all the effort. Simply drive up to Waimea Canyon through Kokee all the way to the end of the road. And don't be fooled by the first Kalalau Lookout sign. Keep driving until the road absolutely ends at a circular parking lot. Walk up the short hill. This is the real Kalalau Valley Lookout.

The lookout allows you to walk right to the valley's edge. You'll peer down thousands of feet into a colorful tropical landscape that is punctuated by a beautiful beach. Look closely at the textured valley walls and you'll see mountain goats precariously perched on high. It's a surreal scene.

Some dock a small boat in the town of Waimea and ride it over to Kalalau Valley to drop off passengers. But this can be dangerous as the beach here features a short break, and there is unpredictable and shallow sandbar, not to mention illegal. The large waves at Kalalau Beach can make a landing by boat extremely treacherous. It's even more difficult to get on a boat to leave the valley in a surge of surf. 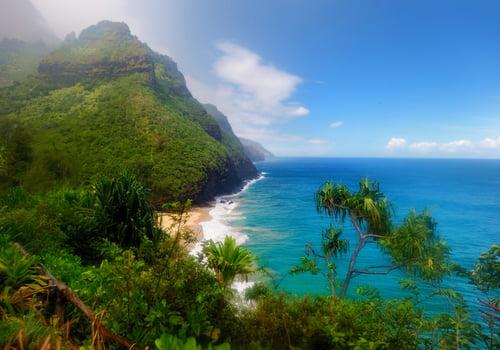 There is a helipad in the valley, but it is usually only used by law enforcement. You'll need to purchase a camping pass for a stay in Kalalau, and they sell out months ahead of time. Law enforcement often helicopter in to check permits. You'll be fined if you do not have one.

Law enforcement also drops in to clean the valley up a bit. There are permanent residents in the valley that live off the land despite the fact that it is illegal. These illegal residents and some overnight campers can sometimes leave mounds of trash behind in this otherwise beautiful and isolated area.

The vast majority of Kalalau Beachgoers hike the Kalalau Trail 11 miles one-way to this stunning destination. The trailhead can be found at the very end of the road on the northern side of the island at Ke'e Beach. The trail takes hikers up, over and down the cathedral cliffs of the Na Pali Coast. It is a difficult and sometimes dangerous hike. 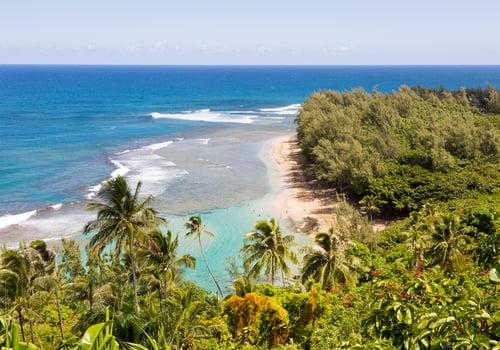 Many hikers turn back when they reach Crawler's Ledge -- a narrow path carved into a cliff that runs for nearly a quarter-mile. The ledge is rocky, you're up against a cliff and the ledge drops off into deep, violent ocean water. Hikers have perished on this stretch of the hike, so you should only cross if you're physically fit and there's plenty of sunlight.

When you finally get to the beach, you'll marvel at the hikers that have carried 50+ pounds of gear across the hike and over the ledge. And, once you're in the valley, you're going to want to familiarize yourself with your surroundings.

The white sand beach is a mile long, and, in this seclusion, you'll have no problem picking out your own isolated spot. The view of the valley is stunning at every point. You'll look up the giant walls of the valley, gaze upon waterfalls and you'll be greeted by abundant wild fruit trees. 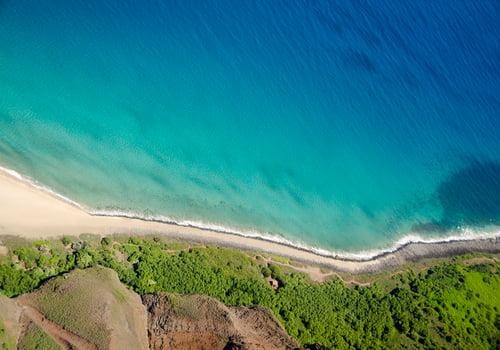 You won't find any facilities down here, but you will find composting toilets. You'll also find a natural shower in the form of Ho'ole'a Falls at the western end of the beach. This is the cleanest fresh water on the island, so it's great for a shower. You can drink this water, but you must treat or boil the water beforehand. This is where you'll meet some of the permanent residents as well as other campers in the valley. Just know that some of the campers down in Kalalau live free and believe that clothing is optional. You'll also be forced to camp in the valley as the hike is too long and dangerous for an out-and-back trip in a single day.

Along the beach, you'll find cliff walls and even some shallow caves to explore. Just remember that Kalalau Beach does not have a protective reef to break the waves. That means rogue waves can crash onto the beach at any moment. Beware of this fact when exploring the caves. Never turn your back on the ocean.

The swimming at this stunning beach can be rather dangerous, too. The short break makes for big waves, especially during the winter season, and the sandbar can be unpredictable. It can be ankle deep only to plunge down to the depths with no warning. There are no lifeguards at Kalalau Beach, and you're an 11-mile hike from help. You'll also have to pay for the expensive helicopter ride if you need to be rescued.

It's better to enjoy the beach, the scenery and its caves while taking a refreshing shower in the natural waterfall. Then make some friends with the adventurers around you while you enjoy one of the last sunsets in the United States. After all, Kalalau Valley opens west to give you stunning views of the orange tropical sun dipping into the vast Pacific Ocean.

The drive to Heana Beach is one of the most beautiful in all of Hawaii. You'll take the Kuhio Highway north past the resort town of ...