Every winter, the world’s best surfers converge onto the island of Oahu. They come to meet some of the world’s biggest waves, and some of those monster waves crash into Waimea Bay on the north shore of the Gathering Place Island. And you get front row seats to the action. 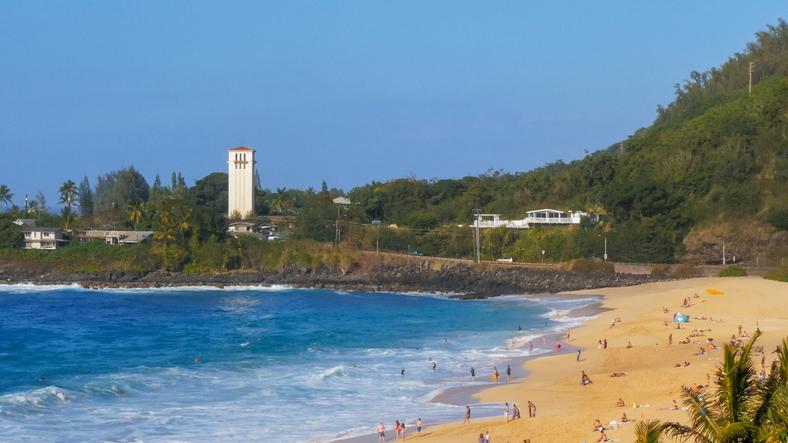 Waimea Bay is bookended by two more big-wave surfing beaches -- The Banzai Pipeline and Sunsets -- but the bay is popular with tourists trying to get a glimpse of the death defying action. You’ll also find a monument to Hawaii’s fallen hero, Eddie Aikau. He served as a lifeguard on this busy beach, and it is said that nobody drowned on Eddie’s watch.

Eddie was the hero that Hawaii needed, and he came at the right time. He was the first official lifeguard at Waimea Bay, and his appointment to the post coincided with the emergence of the north shore’s World Surfing Championships.

The surfing competition barred locals from taking to the waves during wintertime, and the local population saw the championships as just another example of the erosion of their culture at the hands of the Haole. The locals even put together a resistance group to disrupt the surfing competition, but Eddie was there to mediate the two sides. They finally came to a truce which allowed local surfers to take to the waves during the competition, and many of them served as lifeguards for the championships, including Eddie.

Eddie gain notoriety for his daring big wave rescues, and he was also the best big wave surfer on Hawaii at the time. When big waves hit the north shore every winter, someone would inevitably ask, “Who would go out in that swell?” The answer: Eddie would go. And that short phrase -- Eddie Would Go -- became famous on the islands. But little did everyone know, that phrase would also become tragic.

In 1978, Eddie was chosen to sail on an ancient outrigger bound for other Polynesian islands in the south Pacific. It was to take the same routes that the original settlers of Hawaii took centuries ago. Unfortunately, the heralded voyage was doomed. The outrigger sunk less than 20 miles from Hawaii, and the crew needed help. As it turns out, Eddie would live up to his reputation. Eddie would go.

Aikau started paddling back to shore on his surfboard to get help. He was never seen again. The Coast Guard arrived to save the crew, and the islands of Hawaii banded together to perform the largest search and rescue operation in the state’s history. But Eddie left no trace.

He may have vanished, but his memory still lives on. You’ll likely see “Eddie would go” bumper stickers around the islands, and you can visit his monument at the popular Waimea Bay. Knowing his story simply adds to the magic of the big wave beach.

But Waimea Bay isn’t all big waves. In fact, it’s the tale of two beaches. During the winter, the swell surges and the waves can grow as large as 30 feet. But during summertime, you’ll be treated to glass-calm waters, and the water here is crystal clear while the sand is white, sugary and soft. It’s perfect for a north shore escape from Honolulu’s hustle and bustle.

To get to this unforgettable beach, simply take H-201 West until it becomes H-2 North. Once the highway gets to the north shore, you’ll take a right on Route 99. You can’t miss Waimea Bay. It’ll be on your left 14 miles up Route 99 which is also known as Wilikina Drive.

This is an entire beach park. You’ll have the shade of trees, picnic tables, restrooms and outdoor showers at your disposal. You’ll also have the opportunity to jump off of a cliff into the ocean. During the summer, you’ll find a line for the jump right in the middle of the beach.

Everyone is waiting to jump off of the giant rock that sits right in the middle of the beach. It’s almost as if the giant rock was made by some adventure company and helicoptered onto the sand. It’s easy to climb, and it takes you to the perfect spot for an exhilarating jump.