Kauai is the westernmost Hawaiian island that you are allowed to step foot on. Niihau, one small island west, is privately owned and a security team allows its residents to live an ancient Hawaiian lifestyle in peace. So, on Kauai, you're one of the last few people to see the sunset on American soil.

Oftentimes, Kauai flies under the radar, but this incredible island shouldn't be overlooked. It's perhaps the most "Hawaii" of all the Hawaiian islands. It's lush, verdant and dripping with life. The island is home to the indomitable Na Pali Coast, The Grand Canyon of the Pacific, the world's highest elevated swamp and its central dormant volcano is the rainiest place on earth. And all that rain carves Hawaii's only navigable rivers down the slopes of the greenest island in the state back to the sparkling Pacific Ocean. 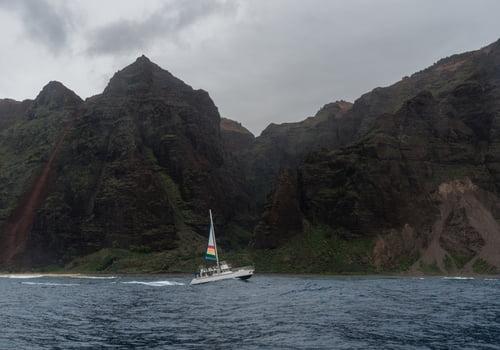 The natural beauty on Kauai is so abundant that the locals would like you to "Keep it Kauai-it." The island is teeming with nature lovers, and they don't want the world's tourists to realize that Hawaii's most beautiful natural attractions wait for them on the Garden Isle.

You won't find anything resembling a city on Kauai. In fact, the local government has outlawed the construction of buildings taller than a palm tree. The island's 60,000 residents are spread out along the coasts, and they love to rise with the crowing of the island's famous feral roosters, challenge Kauai's incredible natural beauty by daylight and they tend to fall asleep early after a barbeque dinner with Ohana. If you're looking for nightlife, then this isn't the island for you.

But one of Kauai's local secrets has slipped. On the northwest coast, in the resort town of Princeville, you'll find a lava shelf that takes the perpetual pounding of the open Pacific Ocean. An olympic-sized swimming pool named Queen's Bath, naturally carved out of the rocks, is now a popular tourist site. What was once a local's secret is now a must-do for visitors on the island of Kauai.

And right next to that dazzling pool, you'll find an interesting little cove full of sea turtles. If you're lucky, then you just might spot some daring local boys diving into its washing machine of surf only to pop back up onto the lava shelf atop a powerful swell. Please don’t join them, it can be dangerous.

Getting to Turtle Cove & Queen's Bath 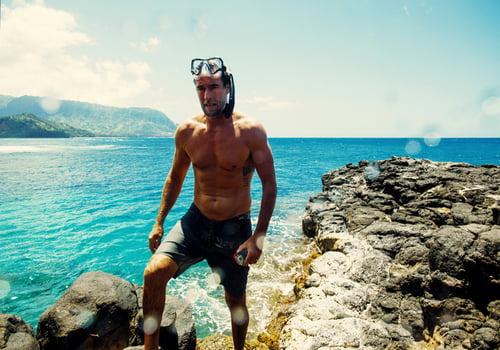 You'll have to take Kauai's one highway north out of Lihue to the town of Princeville. Turn right onto Ka Haku Road before turning right on Punahele and then right again on Kapiolani Road. And you’ll follow this network of roads into a neighborhood to find a small dirt parking lot against a fence and a thicket of trees. You'll find the trailhead where the fence ends, and you'll see the trail descends into a thick forest.

If the parking lot is full, then you'll have to wait for someone to leave before enjoying Turtle Cove. Do not park in the neighborhood. The locals love to call the authorities. At best, you'll receive a costly ticket. At worst, you car will be towed.

The hike down to the lava shelf, Queen's Bath and Turtle Cove is a short one, but it can be dangerous. The trail is made up of Kauai's infamous red dirt. This stuff has the ability to stain your shoes and socks, but, more importantly, it can be as slippery as lake ice in the right conditions. The clay gets slick when wet and compacted, and you can count on the trail being wet and compacted with the flow of wet tourists down to Queen's Bath. 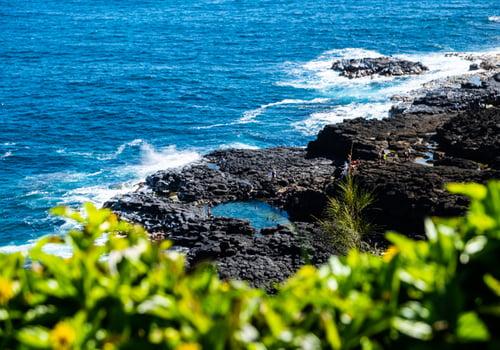 The steep trail has plenty of exposed roots and rocks. Use these to secure a foothold. And if you do find yourself slipping down the hill, do everything you can to stop the slide. There's a waterfall down below that could have you plummeting about eight feet into a rocky creek.

The trail will eventually level out before turning out onto the lava shelf. You'll pass the waterfall and the creek on your right before noticing a wooden sign with a dire warning. Queen's Bath and Turtle Cove can feature wicked swells, waves and currents. The sign shows a tally of tourist lives lost at the site.

You'll gasp at yet another waterfall pouring off the lava shelf straight into the ocean. It's beautiful, but there's much more beauty just around the corner. Turn left and follow the lava shelf west towards the setting sun. Stay on the dry lava rocks to avoid the powerful waves that can lurch up and over the rocky shelf, and make sure to wear sturdy shoes on the sharp crags.

Eventually, you'll end up at the Olympic-sized swimming pool named Queen's Bath. Backtrack just a little from Queen's Bath and you'll end up at Turtle Cove. It's a small cove where the water rises and falls more than 20 feet with each set of waves. Peer into the water, and you'll likely see turtles feasting on the underwater vegetation undisturbed by the rise-and-fall of the water.

How To Stay Safe At Turtle Cove & Queen's Bath 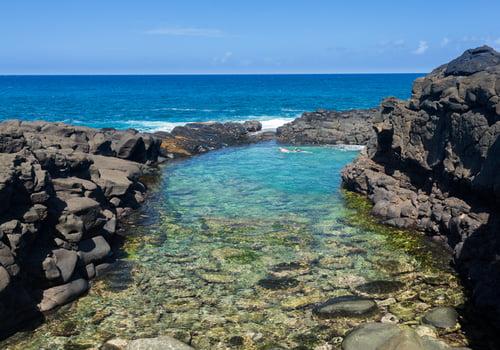 These two attractions are one in the same because they are so close together. And it's absolutely wonderful to take a dip in Queen's Bath after enjoying the turtles inside Turtle Cove. But this lava shelf can be dangerous in the right conditions, especially during wintertime.

The waves here have been known to reach up and over the lava shelf to drag unsuspecting tourists into the open ocean. And once you're in the water, there's no way to get out. You'll be looking back up at a wall of lava rock as you bob in the ocean.

You'll notice a bunch of lifesavers stationed along the lava shelf. If you see someone go into the ocean, then toss the ring towards them and call for help while keeping an eye on them. They'll have to wait to be rescued by the authorities.

But you can avoid these hazards by checking the local surf report. You'll want to go at low tide when the swell is at or below three feet. Once the swell gets up over three feet to four feet, then the waves could potentially get up and over the shelf.

Don't Be A Copycat 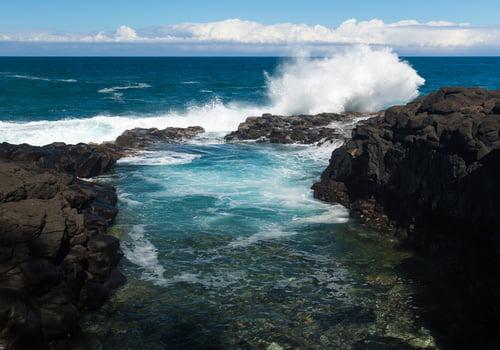 At Queen's bath, you'll notice an inlet from the pool to the ocean. Stay off this inlet as even small waves send rushing water into the pool that could knock you off your feet. You might see tourists taking selfies on the inlet as waves crash behind them. Locals know to never turn your back on the ocean. Do not copy them as a rogue waves could grab you.

At Turtle's Cove, you might see some young boys jumping into the water just as the waves suck the water level down. They hit the water and then ride the swell back up to the lava shelf for enjoyment. This might look like a lot of fun, but these locals are extremely experienced swimmers. If you decide to copy them and time your jump incorrectly, you might be stuck in the washing machine-like current of the cove surrounded by turtles. It's best to simply enjoy the view of the cove.

Bring Your Snorkel Gear If The Conditions Are RIght

Queen's Bath, right next to Turtle Cove, is full of tropical fish. These fish have been thrown over the lava shelf into the Olympic-sized swimming pool and are trapped. The lava rocks also filter the ocean water to make for crystal clear conditions. It's almost like you're snorkeling in an aquarium. 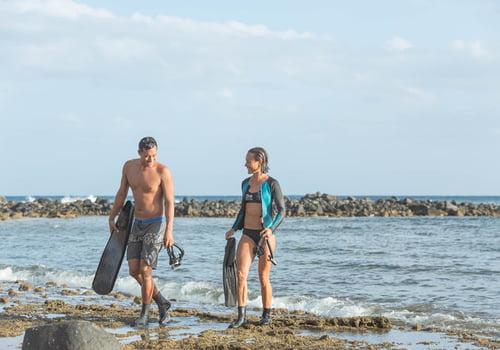 There are a few jump-off points along the sides of the pool, but you should swim around the pool to familiarize yourself with the bottom. For the most part, the pool features a 10-foot depth. But the bottom is made up of a bunch of boulders, some larger than others, and there are a myriad of spots where you can stand with your head above water. You'll want to avoid these sudden shallow spots when jumping in.

You'll find a natural staircase that will bring you down to the pool near the no-go inlet. Just keep your eye on the waves as you lower yourself into Queen's Bath.

Do not snorkel in or enter Turtle Cove's water.

Turtle Cove & Queen's Bath Are Beautiful Just To Look At 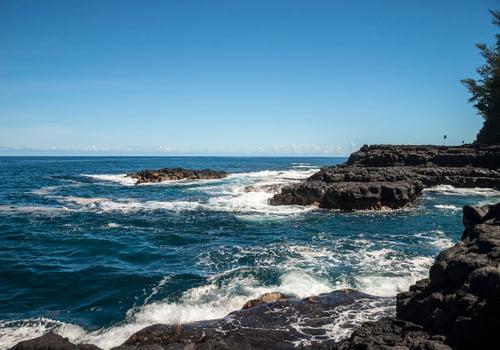 If you visit Kauai during wintertime when the swells are infamously high, then you can still visit Turtle Cove and Queen's Bath. It's absolutely beautiful, especially as the sun sets down the lava shelf to the west of Hanalei.

Just stay out of the water, and make sure to stay on dry lava rocks to avoid any rogue waves that come up and over the shelf. You should still be able to peak into the cove even if you have to hike up the hill behind the lava shelf just a bit to get a bird's eye view during a high swell.

That's good news for beachgoers because Poipu is one of the best swimming beaches on Kauai.

And it's absolutely wonderful to take a dip in Queen's Bath after enjoying the turtles inside Turtle Cove.