Most people make a big deal out of Diamond Head for good reason. The dormant volcano towering over Waikiki Beach and Honolulu is absolutely spectacular, and a myriad of trails bring adventurous tourists to the rim of the volcano’s crater.

But perhaps we’re looking at the volcano the wrong way. What if, instead of hiking up to Diamond Head to look out, we got to a vantage point above the crater to look in? That’s exactly what you do at Tantalus Lookout Puu Ualakaa State Park in the heart of Honolulu.

You’ll drive through small Honolulu neighborhoods before the road turns squiggly up a mountainous switchback. But, at the end of the windy drive, you’ll be rewarded with some of the best views of Honolulu, and you’ll be able to peer down into Diamond Head. 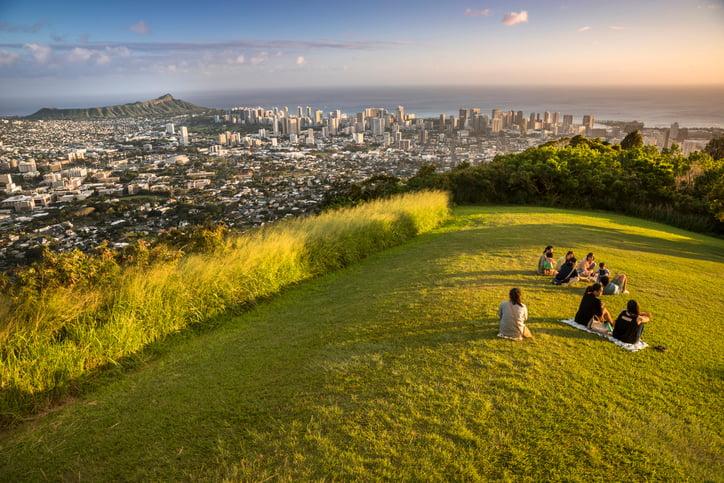 From Downtown Honolulu, you’ll want to follow King Street south. Turn left onto Keeaumoku Street then a quick right onto Wilder Ave before another quick right onto Makiki Street. In about a half-mile, you’re going to turn left onto Roundtop Drive which will wind its way to the top, and that’s where you’ll find the Tantalus Lookout Puu Ualakaa State Park.

The park is open between the hours of 7:00 a.m. and 6:45 p.m., and the viewpoint requires a bit of a walk. The park is protected, so camping, biking, and campfires are not permitted. But, if you wanted to peer down into Honolulu at night, you could likely stay at the viewpoint after sunset without any problems. Just remember to bring a flashlight so you can make your way back to the parking lot. 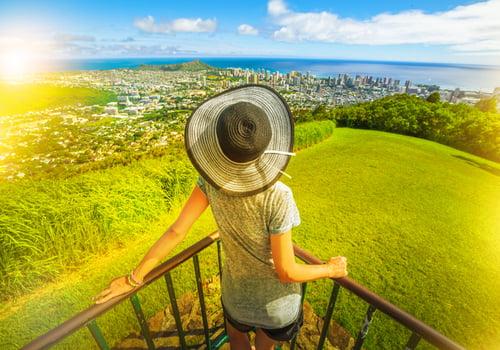 You’ll have to hike out to the viewpoint, but it’s not strenuous at all. In fact, it’s more of a walk than a hike. The trail will cross paths with the Makiki Valley, Moleka, and Maunalaha Trails, but there are signs and a series of trail maps to keep you on the right path. Of course, feel free to venture off onto the other trails if you have the energy and the daylight.

The views from Tantalus Lookout - Puu Ualakaa State Park’s vantage point are unbeatable. You get to look down upon the massive city of Honolulu while Diamond Head and Pearl Harbor sparkle in the distance. This is the best place in all of Oahu to test your panoramic picture-taking skills. Simply try to capture the grandeur of what you see before you while maintaining the integrity of the azure blue waters beyond. It’s a near-impossible task.

Tantalus Lookout Puu Ualakaa State Park is perfect for families as the “hike” isn’t strenuous at all, but the payoff is unforgettable. And it makes for the perfect place to throw down a little picnic as you enjoy uninterrupted views of the city, Diamond Head and Pearl Harbor. And it’s beautiful to watch the sun go down on the cityscape as the building’s lights stir to life for the night.