Scuba Diving Magazine has rated Oahu’s Shark’s Cove as one of the top 12 places in the world for a shore dive. Simply put -- Shark’s Cove is world-class snorkeling. It’s totally worth the drive from Honolulu to the north shore for an unforgettable underwater experience. 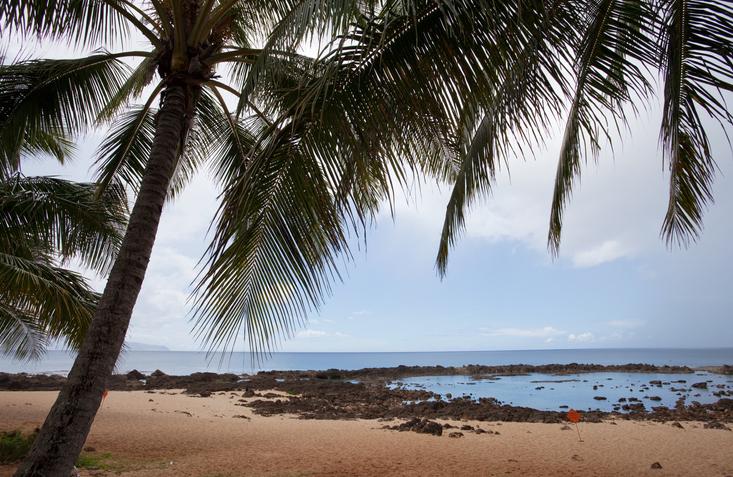 The drive from Honolulu takes you through the heart of the island over the course of about 50 minutes. You’ll want to H-201 North which will turn into H-2 North. Once you hit the north shore, it’s time to take exit eight onto H-99 North. You’ll find Shark’s Cove between Waimea Bay and the Banzai Pipeline.

Waimea Bay and the Banzai Pipeline are some of the world’s most famous surfing beaches. That means massive waves batter the north coast from time to time, so you’ll have to check the surf report before making the hour-long drive to Shark’s Cove.

Summer usually brings glass-calm water to the north shore, and winter brings the famous waves. But you can get big waves in summer and calm waters in winter. As a general guideline, the big surfing waves usually hit the north shore between October and April. The large swell’s peak is usually December and February, but you’ll need to check the surf report the day before your planned trip to see if the water is safe.

The parking lot to Shark’s Cove fills up quickly. It’s also rather small. You’ll want to get here between 9:00 a.m. and 10:00 a.m. in order to snag a spot. But don’t plan on making a day of it here. There is no sandy beach for relaxing. You’ll be there just for the snorkeling.

And don’t let a large crowd scare you off. You’ll hardly notice anybody when you’re in the water. Plus, there are plenty of underwater features to explore. You’ll find the water to be anywhere from eight to 15 feet deep right when you plop in, and you’ll be immediately greeted by schools of surface fish.

The bottom of the rocky bay is made up of smooth boulders, and the lave shelf hides a series of tunnels that can reach to depths of 45 feet. It’s an absolute dream for experienced divers. The water gets deeper the further you go out, but you’ll find fringing reefs, turtles, harmless white-tipped reef sharks and a myriad of colorful fish in every direction.

The cove features a public restroom and showers, but you won’t find many comfortable places to sit. So, after a nice snorkel, you might want to visit the world-famous Banzai Pipeline or Waimea Bay to lounge around on the beach. Or you could go for the gold by visiting the north shore’s Polynesian Cultural Center.