Kauai is The Garden Isle. It’s so lush and verdant that it is the most “Hawaii” of all the islands. It’s a dreamscape where hula skirts sway with the wind and luau dancers celebrate the shifting of the sands. So, it comes as no surprise that Kauai is home to Queen’s Bath. 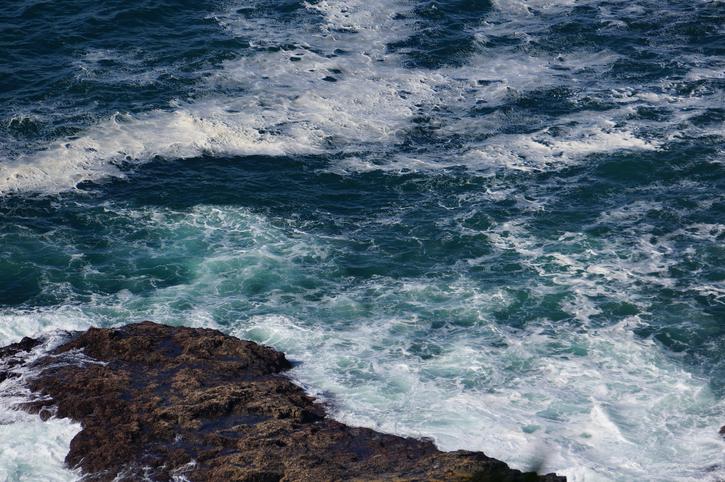 This tucked away little swimming hole is otherworldly. The powerful waves of the Pacific Ocean have carved an Olympic-sized swimming pool into a lava shelf on the northeast coast of the Garden Isle. When the swell is high, waves carry fish up and over the shelf into the pool, so you can snorkel with an aquarium of critters when the ocean is calm.

The crystal clear water allows you to see 10 feet straight down to the bottom, and large lava rocks strewn about the pool let you stand with your head above the water in certain spots. The brave can even jump off of the lava cliffs surrounding the pool for a little adrenaline rush.

And the whole scene is framed by Kauai’s beautiful north shore. You’ll get views along the northern coast down to Hanalei, and it’s an incredibly romantic spot to watch a sun set against the tall trees lining the bay.

But Queen’s bath, with all of its majestic beauty, comes with a dire warning -- tourists have drowned here over the years. However, if you use a little caution and you know when to go, you’ll be safe and you’ll have an unforgettably unique Hawaiian moment to cherish for the rest of your life. 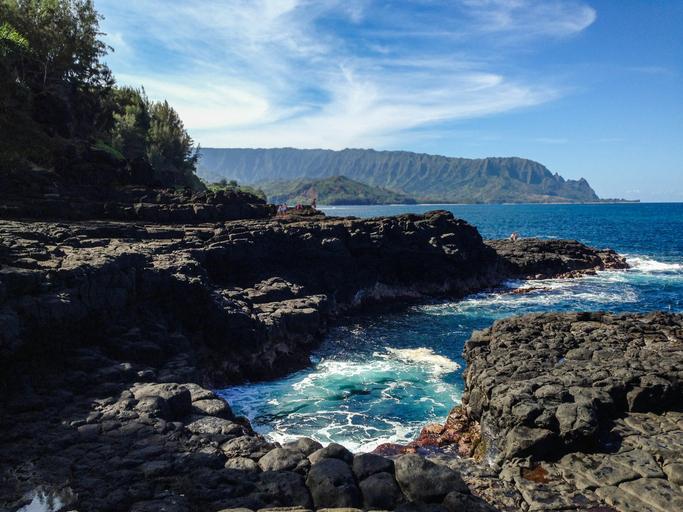 The pool that makes Queen’s Bath is protected from the ocean by a lava rock shelf that stands approximately 10 feet above the Pacific. However, large waves can reach up and over the shelf into the pool. This can put a sudden current in the pool which may rock you against the lava rocks. And, if the wave is particularly powerful, it can suck you out into the open ocean with no way back to land. You’ll be staring back up at the lava shelf.

You can check the swells and tidal conditions online. You’re searching for a surf report for Queen’s Bath, Kauai. You’ll want to stay away during a high swell and if the waves are over four-feet tall. You’re safe if the swell is low and the waves are smaller than four feet. It’s also safer to go at low tide. 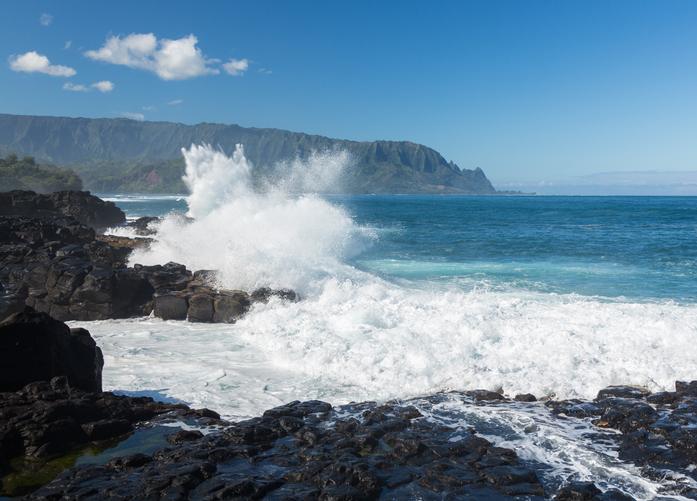 When you get down to Queen’s Bath, you might witness some peculiar behavior. Local boys like to jump off of the lava shelf cliffs into the open ocean only to be popped back up onto the lava shelf by large waves. This might be fun to watch, but it is extremely dangerous behavior. Do not copy them.

You also might see some locals or tourists standing at the edge of Queen’s Bath with their backs to the ocean to take a selfie as large waves crash on the lava shelf around them. Do not copy this behavior. In fact, NEVER TURN YOUR BACK ON THE OCEAN! Large sets of waves and rogue waves can knock you off of the shelf into the open ocean, and, unless you have the finely tuned skills of those local boys, you’ll need to be rescued.

Lastly, do not trust your observation of the ocean. Always check the surf report (link to http://www.kauai.com/kauai-surf-report ). If the surf report says the waves will be larger than four feet, but the waves appear to be smaller when you arrive, do not assume the waves will stay small. Large waves may start at any time, and you won’t want to be in Queen’s Bath when they hit.

If you witness someone go over the lava shelf into the open ocean, do not try to rescue them. Instead, look around for the life rings that have been posted by local authorities all over the lava shelf. Throw the life ring into the ocean near the stranded swimmer and then call for help. They will have to float in the open ocean until local authorities can come by with a boat for a rescue. 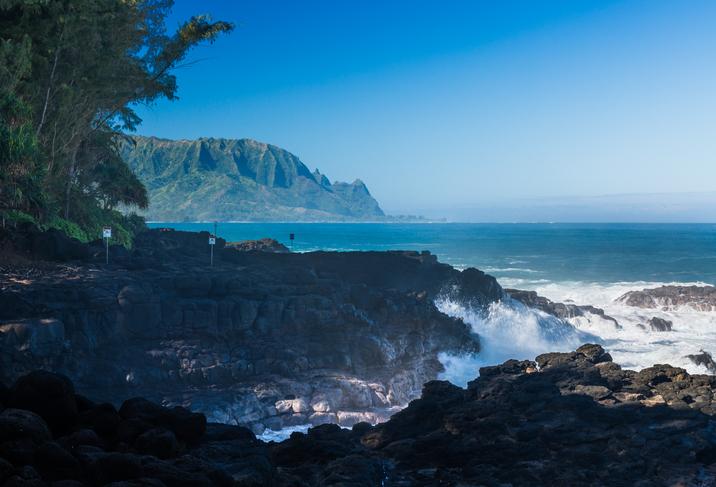 Now that you have heeded all of the warnings, it’s time to check the surf report and head down to this beautiful spot at the proper time. Queen’s Bath used to be a local’s secret, but now the secret is out. The usual advice for beating a crowd to a popular spot is to show up early. That won’t work at Queen’s Bath. You must show up when the surf report says it’s safe, so you’ll just have to jockey with others for limited parking.

Take the Kuhio Highway north towards Hanalei Bay. When you get near the resort town of Princeville, take a right onto Ka Haku Road. This will eventually turn into Punahele Road as you enter the resort area. You’ll find a small parking lot inside of a neighborhood near the end of the road. Do not park on the neighborhood’s streets if the parking lot is full. You are guaranteed to get a ticket or have your rental car towed.

Hiking Down To Queen’s Bath

There is a short 15-minute hike down to the Olympic-sized swimming pool that starts at the western end of the parking lot. The trail drops immediately 100 feet as you enter a dense jungle with great cover from the sun. This portion of the hike is often wet and mucky as soaked tourists have climbed their way back out to the parking lot, and Kauai’s infamous red dirt becomes as slick as lake ice when wet and compacted. 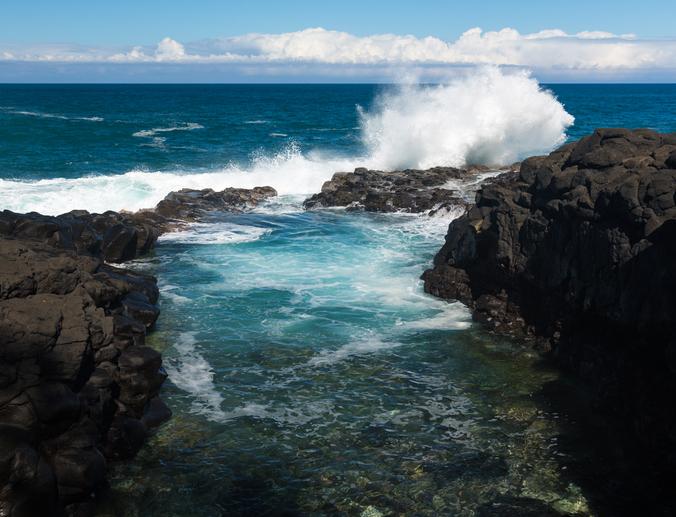 There are plenty of roots protruding from the ground. Use these roots as footholds and take your time. Otherwise, you might find yourself falling or sliding down to the bottom of the hill. It’s also best to wear sturdy shoes as sandals tend to get slick and slide underfoot.

At the bottom of the hill, you’ll come across the first of three small waterfalls. Use caution as you walk beside the waterfall because a slip on the red dirt could slide you down into the waterfall itself. You’ll bend around the waterfall to your right where you’ll finally be off of the slick red dirt., but the hiking doesn’t get any easier.

You’ll walk out onto sharp volcanic rock as you pass two more waterfalls. These are pouring into the ocean. Right in front of these majestic falls, you’ll see a wooden sign with Queen’s Bath death tolls carved into them. But you’ve come down to this attraction at the right time. There’s no need to worry.

Feel free to take a few pictures of the waterfalls, and then it’s time to head west along the lava shelf. You’ll pass plenty of tide pools along the way, and you’ll see the many life rings installed by local officials.

You’ll first come across a cove that many tourists confuse with the actual Queen’s Bath. The cove is not enclosed, so it violently rises and lowers with the waves. This is where you might see locals jumping into the water in order to ride the rising tide back up onto the shelf. You also might see sea turtles munching on the vegetation in the cove. After a quick looksie, continue heading west towards Hanalei Bay along the lava shelf.

You’ll instantly know it when you see it, and you’ll marvel at how nature has carved such a perfectly rectangular pool into the lava shelf. It’s a bit tricky getting down to the water, but there is a clear “staircase” of lava rock that will let you down to the pool on the northeastern side of Queen’s Bath. Or you can be adventurous and jump the 10 feet off of the lava shelf right into the middle of the pool. Just be careful to avoid the large boulders on the bottom. 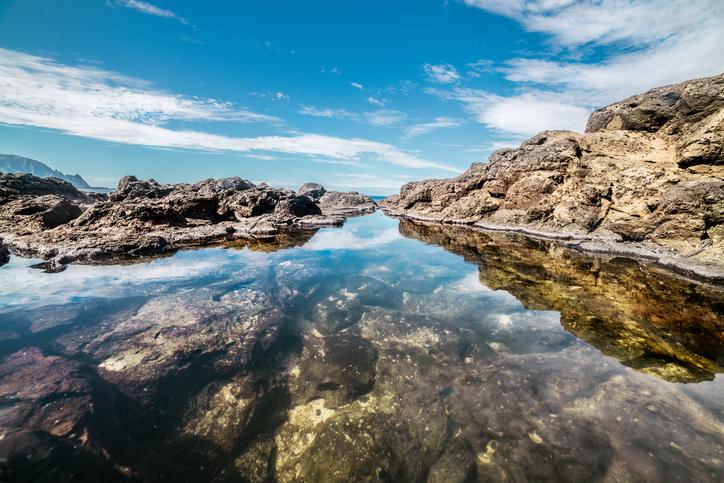 You’ll want to bring your snorkel gear with you to Queen’s Bath. The pool is full of fish that have been trapped after being thrown over the lava shelf by large waves. You’re essentially in an aquarium safe from the ocean when the swell is low and the waves are smaller than four feet.

There are only three spots in the pool where you can climb out of the water. Otherwise, you’ll be in water over your head for the duration of your swim unless you’re tall enough to stand on one of the pool’s submerged boulders. Don’t go venturing out into the pool unless you are confident in your swimming skills.

At the northern edge of the pool, you’ll see a dip in the lava shelf that has been carved by the waves that pour into Queen’s Bath. This is where the waves will enter the pool, and the waves can be powerful enough to send a current throughout the pool. Always keep your eye on this section of lava shelf even when the surf report is favorable. Rogue waves can happen at any time.

This dip in the lava shelf is also where you’ll see tourists and locals standing in order to snap a selfie. Many of them are attempting to catch a wave as it crashes around them. This is extremely dangerous. You should stay away from this little inlet for your own safety.

Going To Queen’s Bath During A Swell 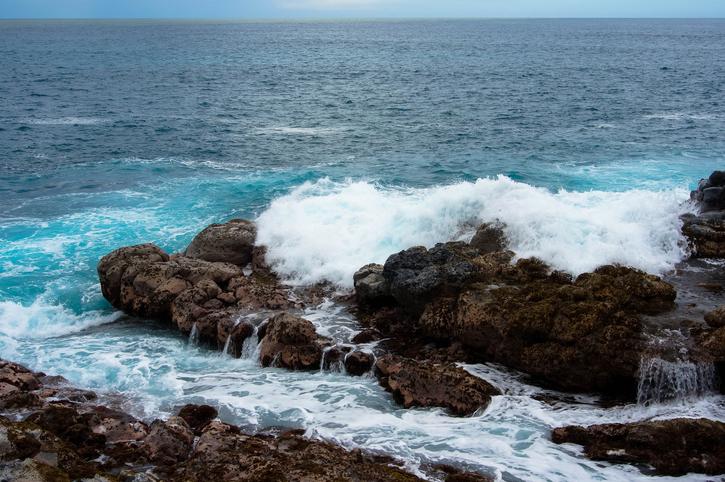 Queen’s Bath is still worth visiting even if the waves are high. Look down at the lava shelf to see where it’s wet. That’s where the waves have crashed. Stay at least 10 feet back from the wave line on the lava shelf, never turn your back on the ocean and you should be fine.

You can visit Queen’s Bath during sunset for amazing pictures of crashing waves, glassy lava shelves and soft skies. You’ll get incredible views along the northern shore to Hanalei Bay, and it’s a beautiful place for a picnic.

If you do choose to visit Queen’s Bath just for the epic beauty, then make sure to check the sunset time. You don’t want to get caught hiking out on that steep red dirt after dark. Or, of course, you can always bring a flashlight.

And it's absolutely wonderful to take a dip in Queen's Bath after enjoying the turtles inside Turtle Cove.