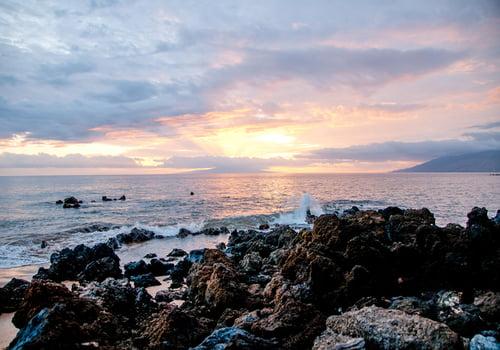 One of South Maui's most beautiful beaches, it's also known as Paipu Beach, located just off Makena Road. This area of Maui is known for its beautiful beaches and turtles. Poolenalena is a long beach, approximately two-thirds of a mile long, with luxurious golden sand. With its gentle slope, the middle section is more for swimming or boogie boarding. The rocky ends are better for snorkeling. The waves are usually gentle, but in the afternoons when the winds pick up, there could be more of a riptide. Also, sometimes there are storms that will also cause dangerous currents. Just be careful and alert! Since it's lined with Kiawe Trees, you'll need to watch out for thorns on the beach. These trees drop thorns that will hurt if you step on one. This beach is usually not very crowded and is a perfect place for watching sunsets, taking photographs, and performing wedding ceremonies.

The Makena Surf Condos and Makena Beach are on the beach's south end, while the north end of the beach is bordered by high-end luxury homes. Poolenalena has two entrances, both with paved parking lots. The first entrance is on Makena Alanui, just past Wailea Gold Club Drive. The second entrance is south of Wailea, a little less than a mile away. There are port-a-potties and showers, but no lifeguard on duty.

The Grand Classic Massage will revive your body as stress is released with this combination of traditional Swedish and Hawaiian lomi-lomi ...