Kauai has but one main road -- The Kuhio Highway. The "highway's" speed limit never gets above 50, and you'll have to watch out for pedestrians and slow-moving scooters on your drive. Take the highway north until it ends and you wind up at Ke'e Beach on the northern side of the Na Pali Coast. But take the same road west until it ends and you'll wind up at a dead end at the southern edge of the Na Pali Coast. 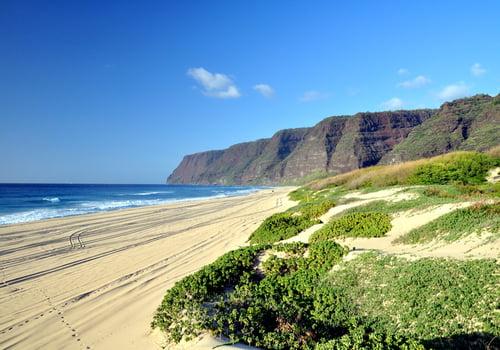 Well, it looks like a dead end, but the road takes a hard left turn and turns to dirt. Take this road, bumps and all, and you'll end up at one of Kauai's hidden gems -- Polihale Beach.

Most rental cars can handle the bumps of the dirt road. Just take your time. But the dirt road will eventually give way to a sandy road where a two-wheel-drive car could get stuck. To avoid the sandy bits, turn left up the hill at the sign welcoming you to Polihale.

At the top of the hill, you'll find a sandy parking lot, bathroom facilities, pavilions and barbeques. You'll notice right away that the climate has changed. You are now on the desert side of Kauai. It's reliably hot, dry and clear at Polihale Beach, but that climate comes with its own pitfalls. The tall, dry trees that give the pavilion area its shade shed sharp spines that hide in the sand. Always wear protective footwear near the trees as the spines can be an inch in length and are capable of piercing a flip-flop.

Past the Polihale sign, its hill and its island-famous monkeypod tree, you'll find more pavilion picnic areas. Each of the picnic areas can be reserved for camping through the Hawaii.gov website, and these pavilions are a favorite among locals. Large groups reserve the pavilions to throw overnight parties complete with beach driving and bonfires. So, you may not be exactly welcomed if you barge into a reserved pavilion, or you may be asked to join the party. After all, the Aloha Spirit is strong at Polihale Beach. 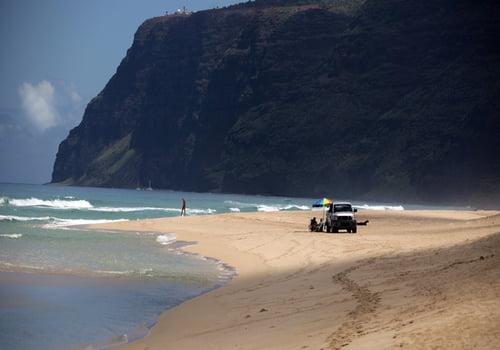 Each pavilion sits high on a sand dune. You'll find plenty of paths that lead down to the longest beach in Hawaii. This may be the whitest sand and the bluest water on all of Kauai as the dry desert air gives the whole scene a certain crispness. The colors seem amplified.

The water is often bubbling from the whitecaps of the neverending surf. There's a short break at Polihale Beach, so the water gets deep right away and you'll immediately be at the mercy of strong currents. It's especially dangerous in winter when the ocean swells. There are no lifeguards at Polihale Beach and it's the longest beach in Hawaii. You'll be a far cry from other parties of people who won't likely notice any distress. Swim at your own risk.

The water here is so blue that you can see straight through the massive offshore waves. This allows you to see Kauai's spinner dolphins playing in the surf as well as sea turtles. But Polihale Beach is perhaps Kauai's best beach for whale watching.

From January to March, humpback whales leave the colder waters of the world on a journey that takes them to the warm waters of Hawaii for breeding. And, if you're really lucky, you'll be able to see one of the world's only examples of interspecies play when the spinner dolphins slide up onto the snouts of the whales to be tossed into the air like a football. After all, they aren't called spinner dolphins for nothing. 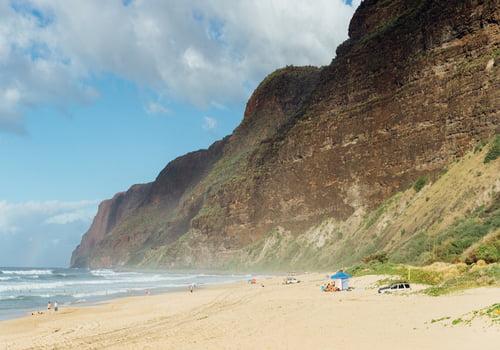 Take a moment to look to your right at the first cathedral cliff of the Na Pali Coast on the northern end of the beach. That dry cliff guards the Na Pali Coast's treasure -- Kalalau Valley. The verdant valley is only accessible by boat, helicopter or a 13-mile hike from the end of the road north at Ke'e Beach. Drive up to the end of the Waimea Canyon road to look down into the untouched paradise of Kalalau Valley at its lookout.

You'll have to beware of trucks driving on the beach near the water. Polihale is the only beach on Kauai where cars are permitted on the sand. And adventurous locals like to test their trucks on the soft turf, so they might come whipping up and over dunes in an effort to catch air. But don't let the trucks dissuade you from a visit to Polihale. They are few and far between.

The dryness of the west side makes Polihale perfect for an overnight camping trip. It's wonderful to sleep under the stars as the dry air keeps most of the bugs at bay. The dry air also makes for a glorious nighttime sky where you'll be able to see the entire Milkyway.

And during the day, you'll be able to peer out at Hawaii's westernmost island -- Niihau. It's privately owned and some of its residents still live a native Hawaiian lifestyle. And the crystal clear blue waters in between the islands is abundant with fish like Mahi Mahi, Ono and Tuna.

Take advantage of the fresh fish by stopping in the town of Waimea at Ishihara Market on your way out to Polihale. Walk to the back of the local supermarket to find a jaw-dropping selection of the island's best poke. Grab some poke and a six- pack from Ishihara Market, drive out to Polihale, sit at one of the pavilions and watch the whales, dolphins and turtles in the crystal clear waters while enjoying a local picnic with your loved ones.

Just make sure to drive back before the sun completely sets. The dirt road that brought you to Polihale becomes covered in little frogs after nightfall.

That's good news for beachgoers because Poipu is one of the best swimming beaches on Kauai.