The west coast of the Big Island is anchored by Kona, and the entire area features reliably hot, dry and pleasant tropical weather. As an added bonus, the ocean water on this side of the island is crystal clear and it seems to glow blue. And it’s all set against the backdrop of black, glassy, reflective fields of volcanic rock. It’s an otherworldly sight. 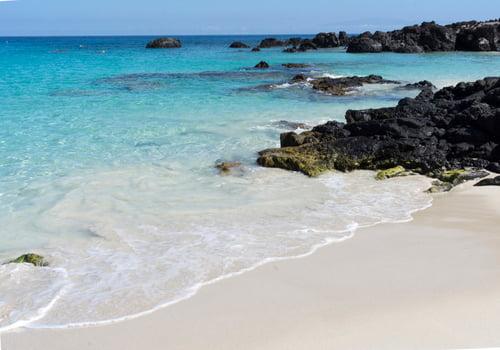 Kua Bay, like most of the Big Island’s west coast, features unbelievably blue water. You’ll also find pleasantly warm, soft and inviting white sand in between pockets of volcanic rocks. Manini'owali Beach is as pretty as a Hawaiian beach gets, but it’s a trek to get down to this little slice of tropical paradise. So, you’ll leave most of the tourists behind. You might even have this entire beach to yourself if you show up early enough. You just have to be willing to hike just a bit.

Manini'owali Beach has no protective reef, and the beach features a short shorebreak. This means that the sandy bottom of the ocean gets deep quite quickly, and is also means that waves here can get pretty big when the surf is up. Swimming is only safe during the summer months when the ocean waters of Hawaii are calmer, but, even then, you’ll have to check the ocean’s condition before heading into the water. There are no lifeguards at this secluded little beach, so your safety is completely up to you. 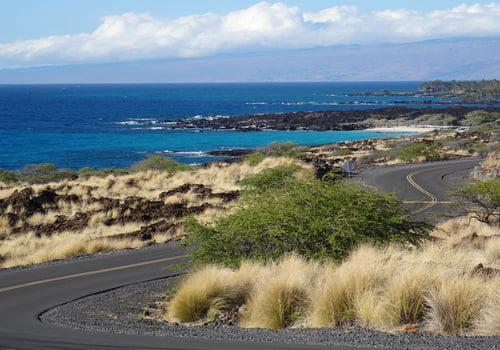 The short shorebreak makes this beach a popular spot for surfers and boogie boarders. If you have experience with either sport, then this is the beach for you. If you’re just learning how to surf or boogie board, then it’s best to learn on a calmer beach. But no matter your skill level, it’s always breathtaking to watch experienced surfers ride the waves.

Manini'owali Beach seems like it was carved out of the coastal lava shelf by some island-sized giant. The perfect half-moon shaped bay is an oasis along the harsh black-rock coast. And all that volcanic rock makes it a bit difficult to get down to the beach.

Manini'owali Beach is part of Kekaha Kai State Park which is laced with hiking trails to freshwater swimming holes, cinder cones and other beautiful beaches. To reach Manini'owali Beach, drive north out of Kona on Highway 19. Look for signs to the West Hawaii Veterans Cemetery about 4.5 miles north of Kona Airport on your right. The turn for the beach is opposite the highway on your left from the cemetery, and you’ll be in the parking lot once you make the left turn.

It’s about a five-minute walk down to the beach from the parking lot, and the parking lot’s bathrooms are the only facilities in the area. Make sure to bring plenty of water and sunscreen for the hot walk. Most of the walk is flat and easy, but, at the very end, you’ll have to climb down a 10-foot lava rock wall to get to the beach. This climb is the big deterrent, and it keeps the beach sparsely populated throughout the year. Only attempt the climb if you’re confident that you can get back up and out of the beach area.

As viewed from the air, the next beautiful beach to be found north of the Mauna Lani in Waikoloa is the gorgeous beach found in front of ...