Makalawena Beach is one of the state of Hawaii’s best beaches, but you’ll have to earn its beauty. You’ll need to gear up before heading out on the hot trail that brings you to this secluded white sand beach that is surrounded by freshwater springs, pools carved into lava rock and shade-giving palm trees. 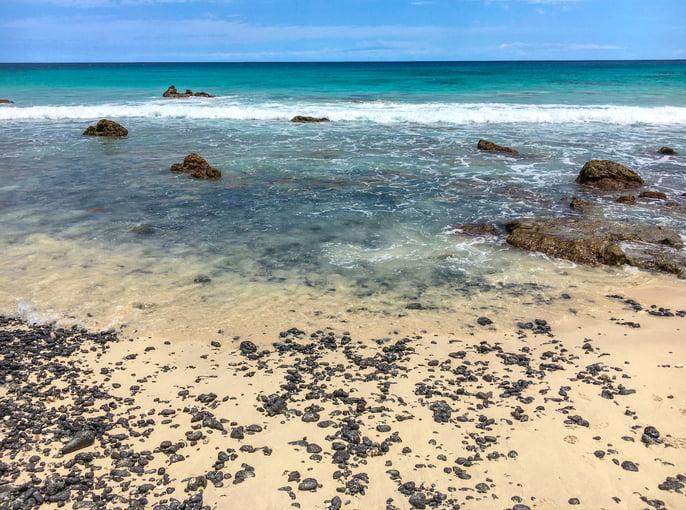 You’ll find Makalawena Beach on a rocky, flat trail that’s carved through a glassy field of volcanic rock inside of Kekaha Kai State Park. To get here, drive north on Highway 19 out of Kona Town. You’ll find a dirt road blasted into the coastal volcanic rock field in between mile markers 90 and 91. The road is rough, full of rocks and crevasses, but your rental car should make it. It’s a mile to the coast and the dirt parking lot.

You’ll find toilets at the parking lot. This is your last chance to use the facilities before you trek out onto the black rock field. Take a look north from the lot, and you’ll see a stand of towering green trees. Behind those trees sits the southernmost beach inside Kekaha Kai State Park: Mahai’ula Beach. It’s a beautiful strip of sand, but you’re trekking a mile beyond to the state park’s second beach -- Makalawena Beach -- which is much more beautiful and secluded. 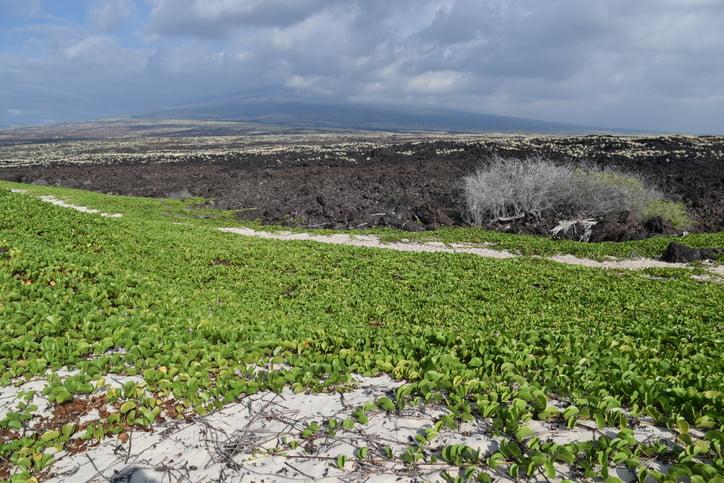 You’ll find a rocky trail cut into the lava rock on the north end of the parking lot. You can easily follow the path with your eyes all the way to the tree stand of Mahai’ula Beach. That’s your first stop. Feel free to take a break under the shade of the trees before walking north along the soft beige sand of Mahai’ula Beach towards a lonely stand of palm trees.

You’ll likely pass sleeping turtles on the north end of the beach. Carefully step around the friendly creatures to explore the lava shelf at the north end of the beach. You’ll find a stairway carved into the black rock that will lead you to a mile-long path blasted into the lava field above. If you can see through the shimmering heat ahead, you may be able to make out palm trees in the distance. That is Makalawena Beach. 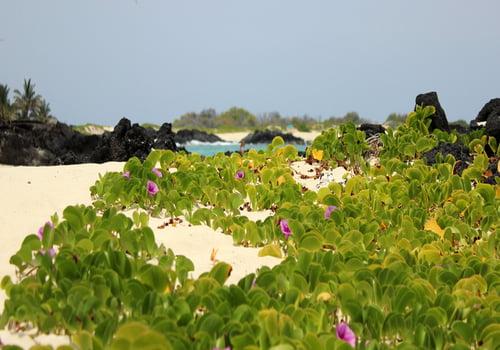 The trail is incredibly rocky, and the lava rocks like to move underfoot. They even appear red as if they’ve been scorched by the sun. This stretch of the walk is incredibly hot as the sun reflects off the lava rocks to intensify your UV exposure. Make sure to bring plenty of water, sunscreen, sturdy footwear, and protection from the sun in the form of long sleeves or a hat.

The flat trail will eventually arch up and over a sand dune where you’ll be presented with stunning views of Makalawena Beach. The sand here is brilliantly white, and it’s all accented by the deep blacks of the surrounding volcanic rock. You’ll also be greeted by the bright green of grass and vines growing upon the sand dune, and all that greenery is fed by freshwater springs that crown Makalawena Beach. 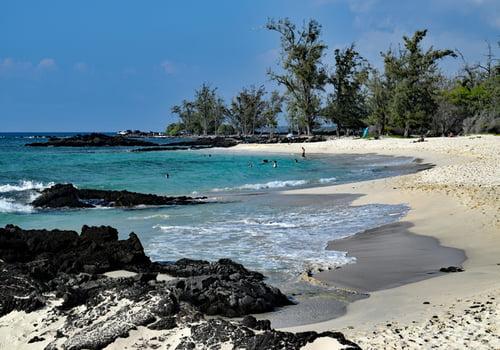 The swimming here can be good when the water is calm, but there is a short shorebreak. This means that the water gets deep rather quickly which produces large waves when the surf is up. You’ll also have to watch out for stray volcanic rocks in the water, so it’s best to wear water shoes when heading out to Makalawena Beach. Just remember that there are no lifeguards on this secluded strip of white sand, so your safety is completely up to you. If there’s any doubt about the safety of the water, it’s best to stay out and enjoy the scenery.

You’re likely to have the whole beach to yourself. Very few tourists make the hot trek out to this incredible beach. You’ll be able to throw your beach towel down under the shade of stout trees at the back end of the beach, and you’ll be able to marvel at your own personal paradise. But your daydreaming might be interrupted by locals who like to carpool down to the beach on a rough four-wheel-drive track that’s not suitable for rental cars. You’ll be envious of them as you strap on your footwear for the hot trek back through the lava field back to the parking lot.