Do you need to snap that perfect social media pic before leaving Kauai? Then Lumahai Beach is your spot. This is one of the most photographed parts of the island, and get that camera ready because the drive to Lumahai is even more beautiful than the beach itself. Just don't expect to swim. 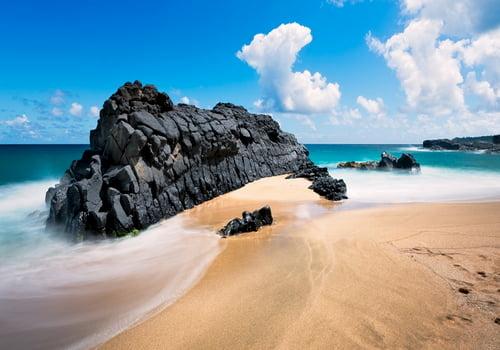 Take the Kuhio Highway north past the resort town of Princeville. You then begin a steep descent on the side of a cliff to Hanalei Town. If it's pictures you're after, don't miss the Hanalei Bay Lookout on the first hairpin turn as the road descends the cliff. You'll get sweeping views of the taro field valley, the bay's ultra-blue water and the valley's waterfall-covered mountains.

The road will slowly follow the Hanalei River through taro fields before taking you through the surprisingly upscale town of Hanalei. You'll cross another one-lane bridge on the other side of town as the road hugs the western side of the bay. You can find the first access point to Lumahai two miles out of town just before mile marker 5. There is a small strip of parking, and you'll have to climb down a path about 100 feet to the beach.

If the parking is full, or you don't want to climb down the path, you can keep going past mile marker 5 to find a small dirt parking lot just before the Lumahai River. This gives you access to the flat and easy path that takes you to the open west end of the beach. 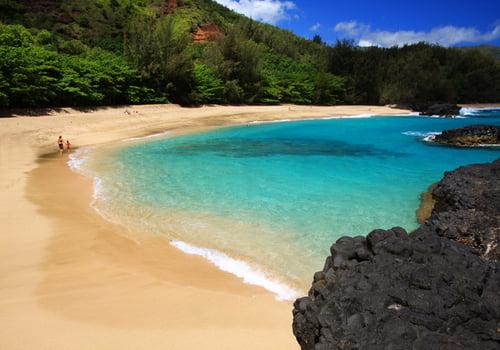 The views from this beach are stunning. The sand is broken up by large lava shelves, and the beach is framed by vegetated volcanic rocks. You can often capture the north shore's large waves crashing on the lava shelves for a dramatic picture. And the whole scene is back dropped by the misty waterfall-covered mountains of the north shore.

Unfortunately, there is no reef to protect the beach from the open waters and massive waves of the north shore. This means the water is susceptible to rip currents, rogue waves, short breaks and heavy surf. You might find some experiences surfers at Lumahai, but don't let that fool you into thinking that the water here is safe for swimming. You're better off driving back to Hanalei for a safe swim in the protected bay.

Lumahai is all about the beauty and the social media-worthy pics. It also makes for a romantic walk down the beach when the sun is either rising or setting. But there are no facilities at this picturesque beach and no lifeguards. It's only good for walking, looking and lounging.