Spouting Horn Park is a must-see on Kauai. Waves have carved a blowhole through the south shore's lava shelf to create a magical site. The surf comes riding into the cliffside to spout out of the blowhole at reliable intervals. The sound can be felt in your chest as the rainbow-making sea spray is launched high into the air.

There's only one tiny road to Spouting Horn Park and it hugs the southern coast of Kauai. And on Lawai Road, just a mile short of the park, you'll find the tiny Lawai Beach. It's so small that you might not even notice it on your drive out to the park. 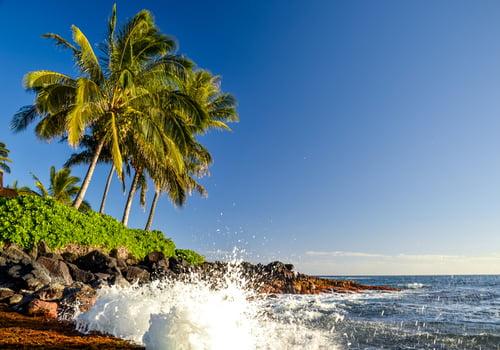 The best way to identify this roadside beach is by its resort. Lawai Beach sits right across the road from Lawai Beach Resort. And it's on the resort side of the road where you'll find a small strip of street parking for this fantastic little strip of sand.

The strip of sand that makes up Lawai Beach is so thin that it can disappear at high tide. The ocean can lap right up against the volcanic rock wall that separates the sea from the road. So, you might be wondering why you would bother for such an unremarkable little beach. Well, the answer is that Lawai Beach has some of the best snorkelling in all of Kauai.

And there's plenty of real estate to set up camp even during high tide. There's a well-manicured lawn on the east side of the beach right at the foot of The Beach House restaurant. In fact, this is a great little beach for those that don't like to get sand everywhere as you can sit on the cool grass to enjoy the views. 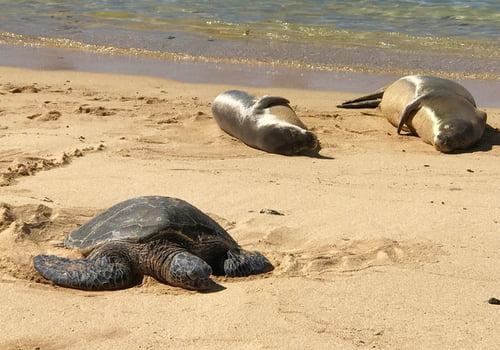 Sea turtles and monk seals frequent this beach. Do not disturb these creatures even if they are lying out on the sand for a nap. It's illegal to touch the wildlife on Kauai and the authorities take this law very seriously. In fact, you might find a perimeter of police caution tape around lounging turtles and seals if they've posted up for long enough.

Tiptoe around the sleeping turtles and seals to get down to the sand. Put on your snorkel gear, get into the water and you'll be immediately greeted by large, colorful fish. The bottom of Lawai Beach is a field of volcanic boulders and the water quickly gets deep. The depth of the water allows you to float over the sharp rocks below as you enjoy the fish feeding frenzy. You'll immediately notice a series of clicks when you're submerged. That's the sound of the parrotfish chomping on the rocks and coral for food.

You'll notice a downed telephone pole which adds to the surreal underwater site. And many tourists like to bring bread crumbs into the water to create a tornado of feeding fish, but, if a turtle is feeding in the waters, keep your distance. Touching the turtle is bad for the creature's health as the oils on your skin degrade its shell. But make sure to pack an underwater camera in case you encounter one of Hawaii's friendly underwater friends.