A little over 12 miles south of Kona, on the hot and dry side of The Big Island, you’ll find the historical Kealakekua Bay. This beautiful little cove was once home to royalty, and it is the place where Captain James Cook died. It is said that the world-famous explorer was killed during a dispute over a stolen cutter boat. Today, you’ll find a statue commemorating the captain on the north side of the bay. 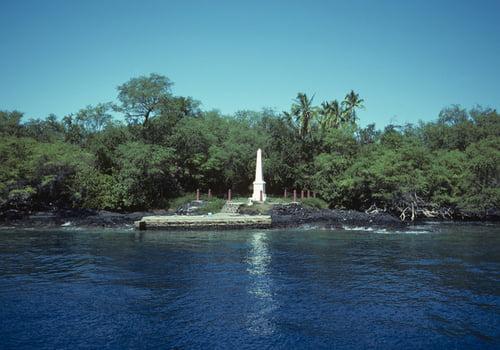 Captain Cook made three voyages around the Pacific Ocean for the Royal British Navy in the 1700’s. He is famous the world over, and you’ll find statues of him from New Zealand to the Cook Islands in the South Pacific and all the way up to Alaska. And he was the first European to step foot on the Hawaiian islands back in 17--.

He first landed on the west side of Kauai where he made peaceful contact with the native Hawaiians. He then set sail to continue his exploration after informally naming Hawaii “The Sandwich Islands” for the Duke of Sandwich. He returned one year later, and this time he landed at Kealakekua Bay on Hawaii.

There, he was greeted by the king, and he was shocked to be treated as a god. As fate would have it, he made landfall during a holy month and the mast of his ship resembled the symbols of a Hawaiian deity. Cook’s crew were even treated as lesser gods, and contact with the native islanders was joyous. But Cook soon set sail to continue his exploration. 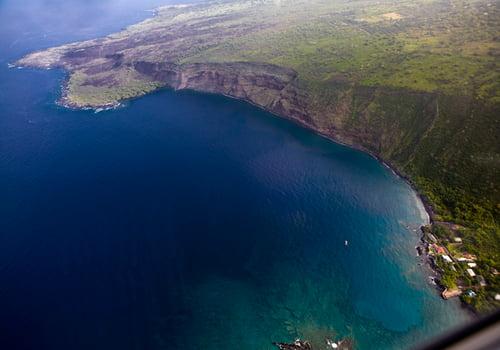 His departing voyage was cut short when the mast of the ship broke forcing him to return to Kealakekua Bay for repairs. His crew grew restless, and the native islanders began to question Cook’s god-like status. That’s when one of Cook’s cutter boats, the small dingies that transfer sailors to shore from the ship, went missing. Cook was furious.

He hatched a plan that to recover the cutter, but it was ill advised and would lead to his death. He stormed into town, took the king by the hand and led him to shore with the intention of kidnapping him for ransom. The king initially went with Cook willingly as villagers gathered around the scene, and a priest began a chant.

Just as Cook was guiding the king into a cutter, the king realized Cook’s intentions. That’s when a villager hit Cook in the back of the head. He was then stabbed to death by a crowd of angry Hawaiians as he fell face first into the surf. He was a god no more.

You’ll find a statue commemorating the fateful event on the north side of the bay, and it’s a beautiful place for a snorkel. You can join a snorkeling tour boat to its reef, you can kayak to the statue or you can hike to the area, but there are no roads. 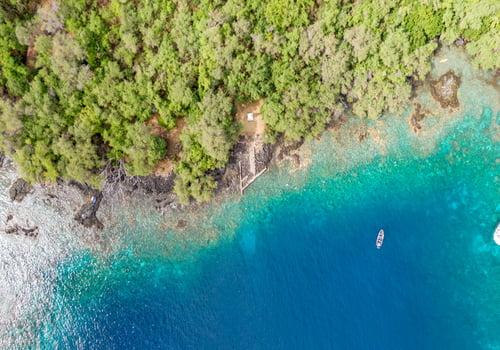 There is a stunning array of colorful coral surrounding the statue, but the water here is very deep. In some spot, you can’t even see the ocean floor. Stay to the right of the statue for the best snorkeling. Going left will take you out into the open ocean.

Kealakekua Bay is a protect marine park. There is no beach, the bay is crowned by a lava shelf and swimming isn’t a good idea save for the snorkeling around the white obelisk that memorializes Captain Cook. But this bay is perfect for kayaking and scuba diving as it is teeming with schools of tropical fish. If you’re lucky, you’ll be visited by Hawaiian spinner dolphins or green sea turtles.

Spinner dolphins are a sight to behold. They launch themselves out of the water to spin like a football before crashing back to the surf. And friendly sea turtles love to munch of the underwater vegetation. It is illegal to touch sea turtles in Hawaii, and the oils in your skin can damage the turtle’s shell. Take the selfie from a distance to avoid a costly fine.

And you can enjoy the bay without a kayak, snorkel mask or scuba gear. Simply take a box lunch down to the picnic area that overlooks the bay to enjoy the unbelievably blue water, the dolphins and the turtles. And you can cheers to the captain by raising a glass to the white statue at the north end of the bay.

It should be noted that you are not allowed to land a kayak at the statue for snorkeling. You’ll either have to hike on a two-mile trail that starts on the cliff above the statue, or join a permitted commercial boat tour. You are also not allowed to launch your kayak from the boat launch in the bay. And if you want to kayak to the bay from another location, you’ll have to check with the owner of the kayak to see if they have a Hawaiian landing permit. Kayaks without a landing permit are prohibited from the bay.

Swimming is not advisable as the Pacific Ocean is rather violent at Kalae, and the cliffs are commonly battered with powerful trade winds.