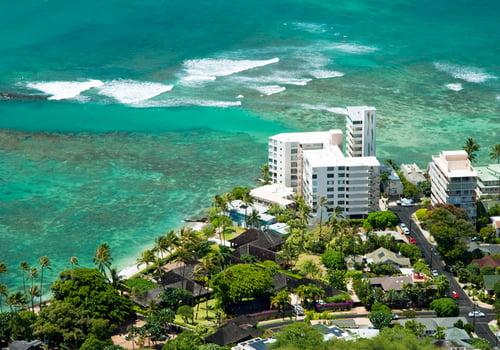 Now, it takes you at least six hours to fly to the Hawaiian islands from the nearest mainland city of Los Angeles over the course of more than 2,500 miles. But just imagine captaining that same journey on a slow-moving ship. You'd near the islands with bleary eyes, to say the least.

That's what makes the lighthouse at Diamond Head so valuable. It's been standing sentinel high above Oahu's cliffs to shepherd ships through the sometimes violent-yet-beautiful waters of the tropical islands. And it's been doing so for more than a century.

You can enjoy the bird's eye view of the lighthouse, marvel at the great expanse of ocean as you look towards the mainland and pay your respects to a building that's saved countless lives over the last century during your visit to Diamond Head. 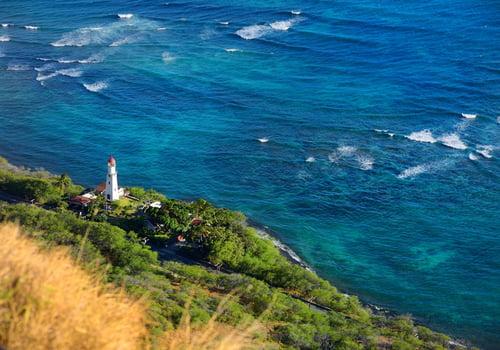 Diamond Head is the long-dead volcano sitting on the southern end of the island of Oahu. The blown-out crater stands 761 feet above sea level and dominates the Honolulu Skyline. And the 300,000-year-old volcano is a popular hiking destination where tourists can climb up to retired pillbox military bunkers that were installed by the US Military long before Hawaii became a state in 1959.

The locals call the crater Le' Ahi which translates to the "brow of the tuna," but the first European explorers didn't see a fish in the mountain. Instead, they found calcite crystals inside the crater. They mistakenly thought they had found diamonds, and that's how the crater earned its Haule (white person) name.

The crater's odd history, as well as its proximity to Honolulu and Waikiki, make it a popular tourist destination that's not to be missed. And you should incorporate a visit to the lighthouse as part of your Diamond Head adventure on Oahu.

Finding The Lighthouse & Its Cliffs

There are three popular attractions at Diamond Head -- the 761-foot elevation gain hiking trail to the rim, the Diamond Head lookout, and the lighthouse. It's recommended that you start your three-point exploration of the volcano early in the morning on the hiking trail to beat the crowd, and, once you're at the top of the crater, you can orient yourself to the attractions in the area.

The top of the well-maintained trail gives you stunning leeward views of the island of Oahu, and you won't be able to miss the lighthouse down below. It sits on the southern cliffs of the island along Diamond Head Road. And after you climb back down the volcano, you'll be relieved that the area's other attractions do not require any climbing.

Diamond Head Road sits just south of the volcano at the edge of the Kuilei Cliffs. If you're coming from Honolulu, then you'll be driving east along the coastal road. The volcano will be towering on your left with ocean cliffs just to your right. It's an exhilarating drive.

The lighthouse was constructed in 1899 at a cost of $2,500, but locals at the time thought the 55-foot concrete tower was "overkill." But authorities wanted a large tower because two large ships had run aground in 1893 and 1897.

The original structure was concrete, but the tower was rebuilt in 1917 using a variety of materials. There's a groundskeeper's house found on the grounds, but the lighthouse has been automated since 1927.

And before the lighthouse, ships were navigated into the Honolulu area using large bonfires atop the southern Oahu cliffs.

Diamond Head Lūʻau is great for families because of our focus on interactive, cultural activities like: hula lessons, lei making, ...