It can feel overwhelming as you look out your window descending towards Kahului Airport. The indomitable Haleakala Mountain absolutely consumes the horizon. The 10,000-foot still-active volcano’s slopes are so massive that it simply looks like the earth has bent up towards the heavens, and, on a cloudy day, it earthen ramp has no end in sight.

Even the air feels different when you step off the plane into the open-air airport on Maui. This massive island, sitting in the middle of the Pacific Ocean’s Ring of Fire, is a completely different world. And there are secrets waiting to be discovered in every nook and cranny. You’ll just have to take your eyes off of Haleakala first.

Of course, there’s the Road to Hana, Molokini Crater and the Iao Valley. But there are also little surprises waiting in the most unlikely of places. Take Lahaina’s Banyan Tree, for instance. 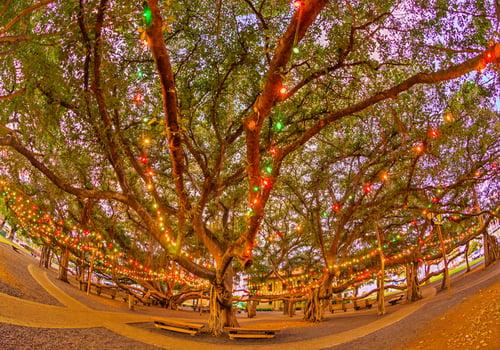 Pull up a map of Maui on your phone. Zoom out. You’ll see that Maui isn’t a singular island. Instead, it looks like two islands fused in the middle.

The larger eastern island is easy to identify. You saw it from the plane. It’s dominated by the Haleakala Volcano, and the Road to Hana wraps around the mountain’s eastern shore.

The smaller western island is where you’ll find Lahaina. This side of the island has a dark history of whaling, but each whaling station has now been turned into a romantic little resort town. And Lahaina is perhaps the most famous of these whaling station-turned-resort towns.

Yes, it’s sad to think about Lahaina as a whaling station, but there is an upside. The western side of Maui is one of the best places in all of Hawaii to spot a whale. Humpback whales migrate to the warm waters of Hawaii between January and March in order to breed. They swim from the colder waters of the world for weeks and over thousands of miles, and they seem to celebrate their arrival by breaching for your delight. 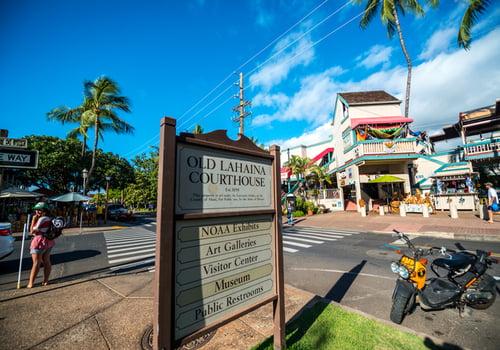 You can’t spend all day on the beach looking for whales. When it’s time to leave the soft white sand, you’ll have to head into town for a meal and a few drinks. That’s when you’ll find the Banyan Tree. It’s impossible to miss.

Sitting in a courtyard in front of Lahaina’s courthouse, you’ll find the massive tree. It looks as if someone uprooted a prop tree from the movie Jurassic Park to plop it down here in the middle of town. It appears as if there are many trees here, but look closely and you’ll see that they are all connected in one massive tree.

The tree’s branches are a dizzying array of octopus-like patterns, and it provides plenty of shade. In fact, the branches and aerial roots spread out so far that the tree is a quarter-mile in circumference. It’s all so massive and impressive that it begs the question -- How?

The Story of the Banyan Tree

The tree was planted by Lahaina’s sheriff all the way back in 1873. At the time, the diminutive Banyan Tree was only eight feet tall. 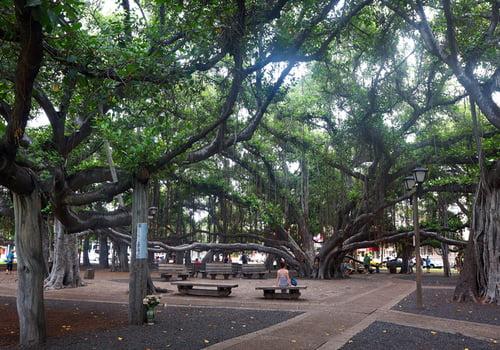 The tree was imported from India to celebrate the 50th anniversary of the protestant missions to Lahaina. The missions were at the request of Queen Keopuolani whom the natives held sacred. After all, she was the widow of King Kamehameha the Great.

The Banyan Tree began to interact with the locals. The branches of the baby tree began to grow aerial roots which would then bend towards the ground to solidify a new trunk. Some of these new trunks fused with the original tree, and locals began to coerce the tree to grow more roots by hanging glass of water on certain branches.

As you can see, the locals like symmetrical growth. And the now-thriving giant stands an impressive 60 feet tall and contains more than 46 major trunks. The adored tree consumes two-thirds of an acre and is lovingly cared for by the Maui County Arborist Committee. It’s the largest banyan tree in America, and it has renamed the courthouse square. It’s now known as Banyan Tree Park.

And it’s a lovely park. The grounds are maintained by the Lahaina Restoration Foundation. But it’ll be interesting to see just how large Lahaina’s Banyan Tree can grow.

Honolua Bay is located on the northwestern part of the island and is a Marine Life Conservation District. Since no fishing is allowed, the ...

This beautiful, crescent-shaped beach is located on Maui's eastern side near Hana Bay. The rare Ka'uiki Head cinder cone is what forms the ...

Located on Maui's Northshore between Baldwin Cave and Paia Bay, this beach is where you go if you don't want to wear clothes. If that's ...

Explore more than 60 indoor and outdoor exhibits at one of the world's top rated aquariums with a week long pass.