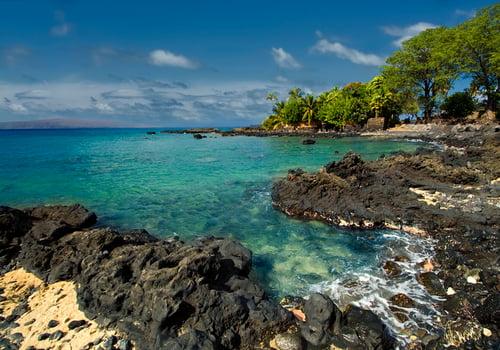 Ahihi Kinau Natural Area Reserve is on Maui's southern coast, just past Makena. It's in the marine life conservation district, so there is no fishing allowed. It's also believed to be the youngest and most delicate eco-reef zones on the island. This is one of the top rated areas to go snorkeling as the coast is mostly made up of coral and lava rock. The lava rock, with its abrupt forms, makes it a perfect home for aquatic life to flourish. The fish are nearby, so you don't have to swim far to find some of the most colorful and beautiful fish in Maui. You'll probably see some turtles too. The best time to snorkel is in the mornings, before the wind starts blowing and the waves pick up. It's a safe place to bring the kids. Parking is allowed on the street, but there are no restrooms, showers, or lifeguards. There aren't any stores nearby, so bring your own water and snacks.

Explore and enjoy riding to skyline view at the Ka’anapali Coffee Farms and explore Ka’anapali on a self-guided electric bike tour! ...

Located on Maui's Northshore between Baldwin Cave and Paia Bay, this beach is where you go if you don't want to wear clothes. If that's ...

Honolua Bay is located on the northwestern part of the island and is a Marine Life Conservation District. Since no fishing is allowed, the ...